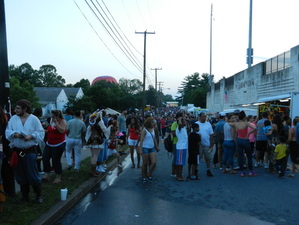 Here was my third and final stop on the 4th of July. The city of Allentown, Pa had it's first, annual street fair. The location was Linden St. between Cedar Beach and J. Birney Crum Stadium. Considering it was the first one, honestly, I did not expect much. I was dead wrong.

Lanta Bus drivers had a well deserved holiday. I walked everywhere. No big deal, it gave me a chance to take photos while approaching the events. I was seriously caught off guard coming up to the festival! I only expected a few vendors and food stands. The event was at least 2 blocks long. I did not expect Linden St. to be blocked off. I also did not expect the place to be almost jammed with people.

In case you are wondering, this was my first time at Allentown's fireworks. Picked a perfect year for it! There was something happening everywhere you looked. The street was lined with food / beverages, face painting and artists. At the far end, was the stage with live music including Toga Party Band. The park at Cedar Beach also had some things happening. A controlled hot air balloon ride was available. Unfortunately, with everything happening outside the stadium, I did not not have a chance to check out what was going inside. 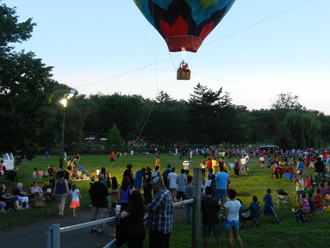 It probably took me about an hour to navigate and get an idea of everything going on. I mentioned artists. The Alternative Gallery, Craig and Andrea Blake were among the several artists displaying / selling their creations. It was not limited to paintings. Jewelry, clothes and several other genres could be found as you walked down the street. Coming down Linden, one of the first things I noticed was a DJ and crowd around him. There was breakdancing happening also. Everyone from kids to adults were on the makeshift floor. I even saw a few people trying it for the first time. They have more guts than I do on this one!

Forgot to mention, with all the events happening; I did not get there until 8:15. The festival started at 4.

With night's arrival, I decided to figure where a good place would be to watch the main event: Fireworks Show. I asked a few people and was told by the lake. It was a little difficult to find a spot. To give you an idea of how close I was: I sat down in the grass and had to lay back to watch.  The national anthem was sung. The sky started to light up and light up it did!!!! The beginning was like a grand finale. From the ground to high up in the sky, Allentown let everyone know the main event started. After the intro., the pace varied with a few times leading people to believe it was the grand finale. Doing this kept people's attention and added the element of surprise. After about 20 minutes, the grand finale did start. What a finale! I will let you decide how good it was.
I was very surprised by the festival and fireworks. The city of Allentown, Pa earned bragging rights on this one. The turnout was much higher than I expected. Everyone appeared to be having a great time celebrating the 4th of July weekend kickoff. A special thanks to Allentown Police Department for being visible and keeping everyone safe. Especially to the officer directing traffic at Linden and 22nd. I heard a guy yelling at him, including slang language. The officer kept his cool and focus.