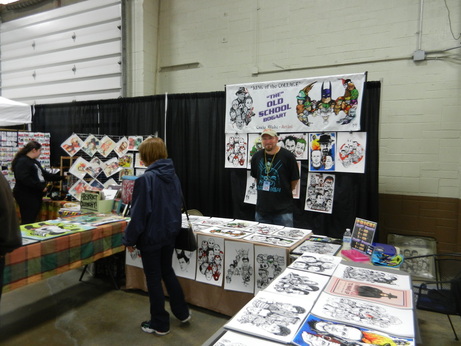 Let me introduce you to…

I have known Craig for several months. His comic / science fiction style is what caught my attention. At Mayfair 2013, I noticed his great interaction with people. Both factors contributed to the interview request.

Question you get asked every time. How / when did you get started in art? Craig: When I was a kid, I used to see movies every weekend with my dad. I came home and started drawing the scenes in the movies. All through school, kids wanted me to do drawings of them. I went to college and didn’t like the structure of it. I pretty much took time off, around 10 years. I did not draw. I started drawing seriously again. I did not draw for a 10 year period. I took my art to a comic con(vention). To one of my favorite artists. He liked it! He said: “You can work at a comic con.” He gave me information on how to do it. I have been doing art, non-stop, for 8 years.

With you, it has always been a natural talent? Craig: Always a natural thing. All the arts: photography, sculpture, painting. Primarily, I like pencil.

I had to ask about digital vs. traditional art

Craig: I place things on Myspace / Facebook, etc. If you want to just get things out there and don’t mind doing it for free. Just putting the work into it. Digital is the way to go.

How do you view digital art? Craig: I say if someone calls it art, that’s what it is. Personally, I don’t do digital. When the digital age came, I wasn’t there for it. What I do works for me. Whatever someone wants to do: digital, 3d imaging, go for it! Nobody should ever down someone else’s game. Based on “If they don’t like it.” Embrace the change.

Is art more of an outlet for your or career? Or both? Craig: For the first 7 years, of my career, I was a self proprietor. I formed an LLC. Turned into my business. Where this is my day job. This is what I do for a living. It does have moments where it’s not fun. Because it’s not an outlet anymore. You have to be a salesman. I am sure the promoting takes time. Craig: You are promoting / networking yourself. That’s one of the hardest things. Making sure your art is being seen in the right places. I do it all: drawing / creating / networking / promoting / my own events. There is no bigger pride than when it works! You did yourself, no one can take that from you.

Advice from Craig: People should not be afraid of doing it themselves.

Your basic genre is comics / realism? Craig: Yeah, Pop culture. I like to do a lot of film stuff, popular tv shows, comics. There is always a crowd for comics. Batman / Superman have been selling forever. They will keep selling. That’s where I carved out my niche.

If I want the outlet, I will do my political themed stuff.  I’ll draw some conspiracy stuff. That’s the outlet. “Wake up. Don’t be spoon fed all your life. Stay away from mainstream media…”

In today’s world, as soon as a person does something something different. A thousand people are doing it. Would you suggest to go for the mainstream or push the limits of your imagination? Craig: I would say you have to do both. If you don’t stay in the mainstream, you will not make any money. It’s real hard to do just what you want and expect others to buy it. For me, I made a name doing Batman pieces. If they don’t know you, they know Batman. Then they will buy it. That gives you the freedom to do what you want. Pretty much, everyone has to figure it out for themselves. You will make money, in art, if you stay in the mainstream.

Craig: If someone wants to just do art (for a living). There are guidelines. You can’t just pick up a paintbrush. Do a painting. Expect to sell it for $1000. Not going to happen. People only want spend money on artists they know or have some form of recognition.

Curious about what form of recognition is better

Would you suggest trying to win awards? Or is feedback and numbers better? Or a combination? Craig: Winning awards does help. Especially for notoriety in your area. It is good to enter contests. Plus, it gives you something to contrast your art against. For me, I have always gone by what the people say. Personally (stressed), I don’t put my art in contests. I go off twitter feed, YouTube likes… That is an instant reflection. You can instantly find out if something is liked by the people. It’s the people who are going to be the judge. Judges, in contests, are not a true reflection. If you want to see how your art is stacking up against others; definitely enter in any contest.

For someone just starting out, no matter how old they are. What advice would you give them? Craig: There is no age limit. Look at me, I didn't start this until my 30’s. There is no age limit on art. What about in general? Craig: Try to find someone, you admire, in your field. Take your art to them. Get feedback from people who have been doing what you want to do, for years. You might come across some people who don’t want to help. You will find some who are willing to give critiques and help. If you look for it. That is probably the best advice.

In addition to being a great artist, Craig is also a great person. He is down to earth. Does not let success get the better of his personality. Has no problem talking with people / helping them / answering questions. I am speaking from observations and getting to know him. He was very busy at Mayfair and made time for the interview on a very windy day. Thanks Craig! The interview was a main highlight at Mayfair for me, seriously.