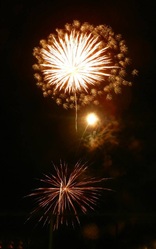 Coplay was my first stop for the holiday. With so much happening in the cities, it's hard to get into the towns for an evening. I made this my first priority. I have some old friends living in town. I decided to stop by for a visit and to get an idea about the show. Whil8e I was visiting, nature decided she had different plans.

Around 8 p,m., clouds started moving in. I was going to head up to the baseball field early and check things out. So much for that idea. A pre-game show consisted of thunder, lightning and rain. I even posted on Facebook: So much for the fireworks. Thankfully, she decided only to prove her light / sound show was as good as ours.

With the warm up out of the way, time for the main show. After the storm, I headed up to Saylor baseball Field (across from Giant Food Store). Did the usual walk around and talked to a few people. Finding a spot on the wet grass, I sat down (worry about the jeans later). This was the perfect introduction to the way shows would go this year. Starting with one hell of a bang, they lit up the sky! With a baseball field, hill and parking lot, LT&T (fireworks company) announced Independence Day in America. Fast and bright was the opening. The rest, varied in pace with one hell of a grand finale, that lasted over 5 minutes. Check it out: https://www.facebook.com/photo.php?v=515332685199227&l=2548339745243198890

The combination of food / a few beers / friends / great fireworks show was a great way to start the 4th. What more could you ask for? Oh yeah, learning about the history of this country.
On July 4th, my holiday celebration started at the Zion's Liberty Bell Church in Allentown. Add another new experience for me. One of many in the past year. This one was very educational. After a welcome and singing of "The Jubilee Bell", everyone was treated to an interesting history lesson.

The Zion's Liberty Bell Church is the actual hiding place of the Liberty Bell during the Revolutionary War. I learned that not only was the Liberty Bell transported here, but 10 other smaller bells also. That is just the beginning of the story you may not know. Curious about the rest?
http://libertybellmuseum.org/

The Liberty Bell's story and ringing of the replica was only part of this event. Before the bell was rung, the children were invited sit on the floor while a story was read. After the bell ringing, any children and parents were invited into another room with Uncle Sam for a windsock making. The adults who stayed were given a history on Uncle Sam, including his origins. Uncle Sam's original name was Brother Jonathan.http://en.wikipedia.org/wiki/Uncle_Sam

The experience was great. People learned about a part of history they may not have known. The Lehigh Valley, specifically Northampton Town (now Allentown) played a vital role in the Revolutionary War. Both adults and children had fun, myself included! The volunteers were dressed in colonial style fashion. Thanks to Zion Liberty Bell Church, volunteers, and everyone who attended. You provided a great start to the 4th of July.