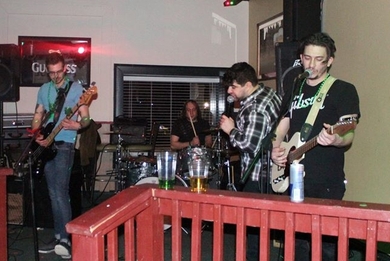 This is a review of Dear Anna's show on Saturday March 15th 2014 at The Pub On Main in Macungie Pa.
Dear Anna is a band based out of the Lehigh Valley .
The band members are:
﻿Lorenzo Bubba~lead vocals/guitar
Josh Zullo~Bass/vocals
Jonny Corneluis~guitar/vocals
Troy Ritter~drums﻿
We were not planning on doing a review of this show mainly because of the rough week that the band had off stage. However decided that the band did a rocking show that warranted a review.

Every time we have seen Dear Anna They come out of the gate looking to get the crowd off their asses and on their feet. They will go out in to the crowd and sit at a table and sing to the people at the table. Lorenzo on more then one accession has taken to the crowd with his guitar had mic and hand the mic to someone in the crowd to hold for him while he sings and plays his Guitar. He is also not afraid to climb on bars or pool tables or whatever might be handy for him to climb on.
During this show the band had multiple times when they let some of the fans come up and dance around the stage with them. as well as both  Lorenzo and Jonny taking to the audience to sing the songs at different times in the night. Including Lorenzo walking to the back of the room and opening the back door and walking out. The crowd was into the band and paying attention to the band most of the time that they were playing. They ended the night by bringing Troy's dad Roy up to sit in on the drums for "Sweet Home Alabama".
The interaction between the guys is good they joke around a lot with each other tell short stories to the crowd.  On top of thanking the crowd they go in to the crowd with the wireless mic and sing to random people sometimes even "sneaking up" on people that might be looking the other way or talking to someone else.
They introduce the members multiple times at different times during the show.
Even with the small dance floor they had people dancing right up by the edge of the stage and on the small dance floor almost the entire night. The crowd really got into the  show.
They do a few songs that you don't find most bands playing including Peaches and a 10 minute beastie  boys block that they start out with sabotage then move onto fight for your right and then end it with no sleep til Brooklyn that brings both Jonny and Josh into the spot light.
We feel that if you watch the videos and look at the pictures that you will see that even with members not feeling good and the band going through a very difficult week in there personal lives that they take the stage and give it 100% of what they got.
over all we would say that Dear Anna is a band that will not only catch your attention but surprise you and keep you wanting more.
We would suggest that you catch these guys when you get a chance.