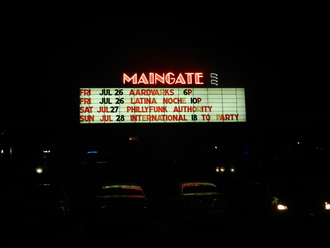 Maingate Nightclub in Allentown is part of the music history in the Lehigh Valley. An old friend and several other people remember the club from the 80's. I have been there for a few of their Bike Nights. Curiosity always gets the better of me. I decided to interview Dominic about the club.
First question was obvious: How long has Maingate been in existence? Dominic: Maingate has existed since 1980. 1980? Dominic: Right. So we are talking 33 years! Dominic: Exactly. That is a part of the history of the Lehigh Valley! Dominic: It's been here since Disco (laughing). Dominic showed me a list of places that existed back then and are gone.


How the club started and evolved....
Dominic: When it started out, we basically had one format and one market. As it became older, the club had to branch out to different demographics. We came up the slogan: "We love ALL music!" The reason behind that is Maingate showcases all kinds of music and formats. We have different events that range from Latin to Rock / Local to Regional and National (music). Our events consist of teens, bikers, you name it!

Important Note: Maingate has events where under 21 are permitted. These events are well covered by security. No one underage is permitted alcohol under any circumstances. Back to the interview...

Dominic: Ideally, those strategies get kind of complicated. As you get older in this business; 33 years, you are a dinosaur. You have to appeal to different groups. Meaning Maingate has a tendency to be different night to night. An example: You will not recognize between Saturday and Sunday night. Saturday is mostly an over 30 crowd. Sunday is international format. Sunday night, you have all different cultures. Tuesday, you have bikers for the live music. Maingate has evolved from a dance hall to a dance hall / concert venue. What makes it unique is: different nights that target different groups and tastes.

You get a crossover also? Dominic: Right. Let's say you have teen events. That becomes your customer in later life.

Dominic pointed out Maingate has a long history of repeat customers.

Dominic: A lot of the customers that are in their 30's - 50's came here as teenagers.

From stopping by several times, I noticed the Disc Jockeys at Maingate. This also refers to the crossover crowd.

Your DJ's really know what they are doing! I have seen the DJ's here pack the dance floor more than a band. Dominic: There is an art and science to that. Having Disc Jockeys that know how to entertain bands and break up the bands (between sets). Most people who like bands, do not necessarily like a DJ and vice versa. Usually, when you go to a concert or rock venue; the focus is a live performance. Maingate was, primarily, a dance club. It's presentation as a dance club was better than most. It has the sound and light show. This gives you the ability to with both.

Going into the setup of the club:


Dominic: Sometimes, I see it when Maingate has local bands. The pa for the band will be lower end compared to the club's sound system. Sometimes, that is not the case. Believe it or not, it does have a psychological effect. There are occasions where you may not be able to hear so good in the back. The DJ comes on and "POP!!!" with the sound.


This may sound like a strange place to keep you hanging. It's also a great one! Reason: I wanted to get more into the history of Maingate. The first question in part 2 will refer to how long it "actually" has been open and operating....


One of the perks: I love keeping you in suspense. Yes, I am smiling and laughing at this. I hope think it's funny also.


Thanks for reading part 1 of my interview with Dominic Germano about Maingate Nightclub!
Check out what is coming up and the variety of music:
http://maingateclub.com/