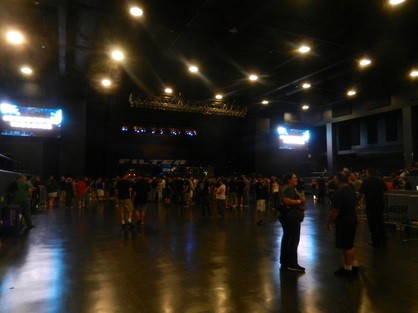 Filter opened for Stone Temple Pilots on 09/04/13. This show kicked off the tour. Arriving about 45 before showtime, I always like to get a feel for everything. Including entering the venue and crowd before the show starts.

You enter the Sands Event Center through Vision Bar. Staff and security were outside to make sure everything went smooth and fast. Entering into Vision Bar, the place had a large crowd inside and on the patio. The weather was very nice to be outside. The closer it came to showtime, people moved into the Event Center.

With the show starting on time, lights went down. Energy level was fairly high with almost everyone facing the stage. General admission was standing room only with a majority of reserved seating filled. T-shirts and a small bar were available in the back. Here is a quick rundown of how the Event Center is setup:

You walk in. Two bars, on the left and right have snacks and beverages. If you have reserved seating, again to the left and right. General admission is down a short flight of stairs leading to a large, lower area. Stage is located in the front. The photo is accurate.

Now, back to the review. I am going right into the overall rating:

Overall rating: Have Attention. The combination of high ratings including Technical and Crowd Interaction saved this one.
Technical: Excellent! There was a very good balance between music / lyrics on levels. The music did not overpower lyrics on any song. The video on both screens switched flawlessly between closeups and band scenes.
Crowd Interaction: Surprised Me! For almost the entire show, there was only what you expect. Talking to the crowd, getting everyone into it on some songs. What saved this rating? 2 things lead singer, Richard Patrick did. The first happened on the last song. He jumped off the stage, into the space between stage and crowd. The second and completely unexpected part? End of the show he thanked the audience. He also said the audience is who pays their bills and puts food on their tables. Richard then proceeded to do a free meet and greet next to the table selling t-shirts. Major points and very high impressive factor here! I swear, this appeared completely spontaneous.
Band Energy: Have Attention. Filter hit the stage with the energy level high. Even though there were hard breaks between every song, they maintained that level. By looking at the members, it was easy to tell they played and sang hard.
Crowd Response: Average. Everyone cheered in between songs. Reacted with clapping, cheers, etc. when prompted by the band.
Crowd Energy: Not Bad. Even though people kept their attention on the stage. Through over half the show, most were just standing / sitting and not really moving to the music.
Music: Excellent! The band did not miss one beat or lyric. Even though I was not familiar with all the songs, I did not observe any screw ups. I have to give this rating here, even though it's what you expect.
Band Interaction: Excellent! Each member knew where the other one was at all times. They came together to play and sing and separated without any problems or screw ups.

Filter did have a good show. The standing room only, general admission, did not appear to bother anyone. Would I go see them again? Honestly, I have to give you a maybe on this one.

Check out what the band is up to:
http://www.officialfilter.com/about/index.php 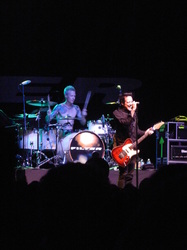 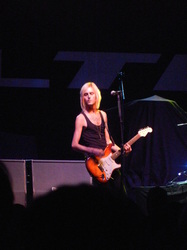 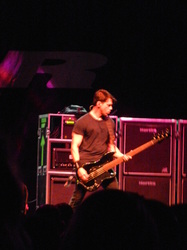