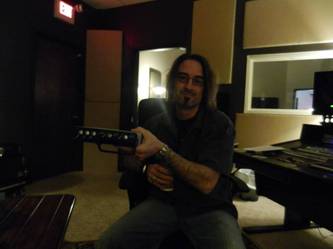 I found out about Midnight Studios and Andrew on Facebook, big surprise! After viewing the posts by the studio and Andrew, my curiosity level began to rise. Especially, since I will attempt to record my first album this year. Talk about doubling the interest.

As a journalist, I always look for articles to do around the Lehigh Valley. Anything I have not done or different, I go after. Between doing music reviews / band interviews, a recording studio makes sense. The interest of recording a single then album also provided me with a slightly different angle.

I spoke with Andrew on the phone and through messages about both. With his very busy schedule, Andrew made time to give me a tour of the studio and the interview. He did not try to sell me on anything. During the interview, you will find out something he did point out on this subject.

How Everything StartedLike every interview I do, the best place to start is the beginning.

How long has the studio been here? Andrew: We officially opened in January, 2009. We started the build out in July, 2008. It took us from the end of July to the beginning of October to get it all built. Wow! Andrew: Between the walls, carpeting, soundproofing, running all the wiring, getting all the equipment up and running. it was a long process, but it was a great learning process. Part of my learning was actually building and designing all the walls. Then it went to my mentor. He would review it. Be like "Nope, can't put this wall here for that reason. This is the wrong angle." So it was part of the learning I had to do.

Since Andrew mentioned his mentor, I figured this is an important part of his background / experience / credibility.

Backstory and Experience will skip the long list of credentials Andrew mentioned about Earl Cohen. They are impressive to say the least. Seriously, check out Earl's website to see the list and names.

You mentioned your mentor. What is your mentor's name? Andrew: His name is Earl Cohen. I met him when I was playing in a band. He was going to produce the band. The band broke up. At that point, I was like I want to get seriously and full time into the producing and engineering. I have always, always, always loved this end of the business. I knew this was what I wanted to do. I was going to go to Berkeley, in the city. Commuting at nights after my day job at that point.

Andrew: I said to him (Earl): "I'll pay you the exact same money. I'd pay Berkeley." He's like: 'Absolutely'. For 2 years, I studied under him. I would go one night a week up to his place; from about 6:30 p.m. to 2 a.m. We would just sit there and he would teach me. Make me do hands on experience.

Andrew really started to get psyched at this point. Almost like he could not wait to tell this part.

Andrew: I mean to sit there and work with a guy who has been there. Especially with that list of credentials. Andrew: It was phenomenal. The stuff I learned. We are such great friends now.

Here is an example of that friendship.

Andrew: I just talked to him last week. I wasn't getting the right sound I wanted on something. I just called him up. He's like: "Oh, did you think of doing this?" I love the way he teaches. The way he brings me along. He never gives me the answer. He makes me figure the answer out. So now, it's stuck in my head. In my opinion, that's the best to do it. That's the way a lot of people learn. Andrew: The biggest lesson I learned from him. This is ingrained in my head.

This one is a little funny and gives us a serious look at how Andrew learned the techniques.

Andrew: Finally got to the point where I was ready to start mixing. We were at his home studio. He was working on this song from an artist in England. He goes: "OK. You're driving now." I was like... (Andrew did have a slightly scared look on his face when he recalled this.) Andrew: He brought up the session. He put up the raw session. He took all of his plug-ins (software add-ons) and everything out. Dropped all the faders.

Here is the conversation, as Andrew recalls it. I could easily believe it was the truth due to the various emotions Andrew showed.

Andrew: He (Earl) goes: "All right, mix." I get up there and bring the faders up. I am listening. I didn't like the kick drum. I went in and soloed out the kick and started working. He goes: "STOP!!!" I was like: "Oh crud, What did I do???" He (Earl, apparently calm) goes: "Knew you were going to do that." So, of course, I'm going: "What did I do? What did I do?" He said: "You're right, the kick drum needs work. Do you have any idea what the song is about?" I asked: "What are you talking about?" Earl to Andrew: "Is it a happy, sad, dance, pop, or mad song? What is the artist talking about? You have no clue what this song is about. How can you start mixing until you figure it out?" Andrew to Earl: "Yeah, you caught me."

Andrew: It was the greatest lesson I could have ever learned. Now, when I start to mix. After all the raws and everything is put in, I'll sit here, put the volume at a nice level. Start to listen. Take notes. This is what I want to do. Learning that way is amazing.

The direction, moved briefly to what is learned in school / books about producing music.

Classroom learningI wonder if they teach you that when you go to school? Andrew: No, they don't. I had somebody in here two weeks ago. They are, probably, going to intern with me. He was telling about the classroom. They are giving him great knowledge. It's that real world knowledge and being in the driver's seat doing it. That you can't learn in any book. Andrew: No. I tell everybody I love golf. Just because I give you the same golf clubs, ball, shoes, watch, hat as Tiger Woods. Your not going to beat him. Not happening. Because there is all the years of experience that goes into it. That's where mixing and producing is so different than just recording. It's a whole different animal.

Leading us to what makes one song different from another and some, basic, technical sides of mixing / producing.

It's getting harder to tell one song from anotherOne song likes another. Even the genres are starting to blend together. It sounds like even when mixing, here is the set formula. It sounds like you take an entirely different approach to it. While staying within the base parameters, have each album / song it's own unique style / sound.

Here we get a good example of how Andrew works as well.

Andrew: I'll use different delays / choruses / reverbs on verse vocal than chorus vocal. Same thing like the guitars in a verse might sound one way. I might be looking for that certain type of sound that the artist wants and that feel. I'll do something completely different in the chorus.

Andrew: You have to make it all fit. The way Earl taught me. He didn't teach me so much audio. You have to look at it like a painting. It's up to the artist to bring you the, absolute, best colors. You, as the mixer, has to take those colors and paint the picture the best way. The best colors in the world don't, necessarily, make the best painting? Andrew: Right. It's a very tedious process.

Andrew: When you hear anything on the radio, there is such a long process that goes into actually getting the song to that level. That it can be released.

Andrew answered my next question before I could ask. Today's technology and recording studios. Check out part 2 to find out and the rest of the interview.