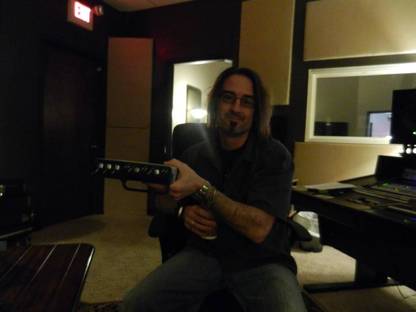 Present: I wanted to find out who his first artist was and how the studio evolved from day 1 of the official opening.

Opening the doors to any business is one thing. Getting that first person / artist through those doors is an entirely different game. How did that happen? Andrew: It was: Open the doors. Get a Facebook page. I took flyers around to all the local music places. My goal, at that point, was get anybody / everybody through the door. To let them hear what I could do. So that word of mouth got out. Even in today's social media world, word of mouth is still the best form of advertising. Andrew: Yeah. It's all word of mouth.

Andrew: I had a local rapper, just walk in. We did a couple of songs. A female artist came in. She brought a couple of tracks. We did some recording with her. A local band came in. We just threw up the mics and kind of went for it. You have to jump in. Get your feet wet. It's a learning process with anything in business.

Andrew: It's building your reputation, working and getting better at your craft. That first was like: "WOW!" Plus we have the practice rooms. Part of the business strategy was getting artists into practice. Show them the recording. And do a recording for them. A lot of my business came from bands that came in for practice.

Andrew: It slowly kept growing. The one kind of good and bad thing is: bands come and go. The band might split up and form 3 other bands. The 3 new bands may come back. Plus, members of one band may have other projects going. Andrew: Yeah. It kind of grew and took on a life of it's own from there.

Andrew: Winning the awards, kind of, gives legitimacy to it. It was really great to get that local recognition. Note: Awards from the Lehigh Valley Music Awards and Montgomery Bucks Music Awards. Andrew: It spread out from there, again.

Evolving from the awards...

After a brief, side conversation: Andrew gives us a good idea of his work ethic next.

Working hard without knowing it / And old saying..."If you love what you do, you never work a day in your life" Source unknown.

He has a lot of enthusiasm when talking about this.

Andrew: I have not worked since 2009, when I started doing this full time. I have not worked a day. Even though, I have been in here and done 26 hour sessions, straight through. The guys from Stingy Jack, we did 26 straight hours on their demo. When I get in that zone, I don't stop. That's me and my drive. Some people mistake that for ego. It's not, I want it that bad. No matter what it is, you are going to have critics. I'd rather know honest feedback so that I can get better. You need that as anybody, especially as an artist. (Both positive and constructive criticism.) I love honest, straight forward competition. I've got no problem with that. When people do stuff backhanded, that drives me crazy.

I gave Andrew an extremely belated congratulations on the awards. I was very serious on this.

Time to wrap up the interview with some final questions...

Why would someone use Midnight Studios? With all the recording studios in the Lehigh Valley, What separates you from other studios? In your own words. Andrew: To me, it's the final product, the final mix. It's what comes out of those speakers. A lot people judge recording studios by all the cool gadgets and lights. That has nothing, nothing to do with it. At the end of the day, I don't care if you are in a basement studio or 25 million dollar studio. The only thing you are hearing, is what comes out of the speakers, that's it. I put 100% of my heart and soul into every, single, mix.

Andrew: When that artist walks out, I want them to be like (saying with pride and emotion): "Hey, this is MY Song, listen to it." They shouldn't be making excuses. When they are out, wherever, you want them to say: "Hey, check this out!" Not even a doubt in their eye. Andrew: Yeah, I truly believe it's my mixes at the end of the day. It's my producing. Andrew used a quote that was posted the day before: "Andrew pulls stuff out of you that you didn't even know you had in you." To me, it's so satisfying, when an artist / band comes back in. Sits down to hear the final mix. Their jaw just drops. They don't know what to say. That's when I know I did my job right.

I had to finish the interview with Andrew giving advice to people interested in working at or starting up a recording studio.

Advice to those curious Obviously, schooling / degree really helps. I wanted to know what Andrew's advice beyond the pieces of paper was. No matter what age you are.

Andrew: You have work and learn every single day. I think the schooling and knowledge is important. If you can do it. If you can afford it, do it. It's going to give you a great base to start from. There is NOTHING like hands on knowledge. You have to learn.

Andrew: You have to take a real, honest, look at your work. Figure out what you need to do to get better. It's not going to be just a snap of the fingers and your better. You have to be really focused and concentrate. You have to set goals.

Andrew: The goals have to be honest and attainable. Andrew recently spoke at a career day for a local school. He truly believes in the quote at the beginning of this section.

Andrew: In this business, don't pigeon hole yourself. I listen to EVERY style of music. I incorporate that into my work. Going back to the previous question, I think that's what makes me better. I listen to everything. So that, when I am working with someone; I can draw on multiple genres. To give that artist their true meaning and identity.

Going back to something Earl (his mentor), taught.

Andrew: One of the things he told me: "I'm going to teach you all the rules. So you know how to break them." I will do stuff that, technically by the rules, you're not supposed to do that. OK, says who? At the end of the day: if it makes that music coming out of those speakers sound perfect! Then who is to say what is right and wrong?

You would actually encourage people to be experimental? Andrew: Take chances! If you screw it up, you screw it up. You are never going to learn, if you are not pushing yourself to make mistakes. I've made mistakes on mixes. Changed them. Remembered the mistake because I might use it on another mix. You have to challenge yourself. Again, you can't be afraid of the feedback. I want to clarify: feedback meaning on your work, not through the speakers.

Andrew: You can't be afraid of true, honest, good feedback. You have to keep learning. Again, you have to set realistic goals. Go after them. There is no shortcut to this. No shortcut to becoming a good mixer / producer. This (point) is for the artists too.

Andrew: Go to the studio. Don't just call them. If another is right for you, go to them. I want all the business here, obviously. I'm a businessman. Of course, that's basic common sense when it comes to business. Andrew: I do tell artists: "If you can go somewhere else and be happier, then go." I know what my product is. I know how good I am. In the end, the client's got to decide at the end of the day. Not every business can be everything to everybody. You have to give yourself as much opportunity as possible.

What did I think, overall?From the moment I walked in, Andrew was very friendly and professional. I almost immediately relaxed. Yes, he did know there was a dual purpose for my visit. That did not phase him one bit.

I was given a tour of the studio at the beginning. Then, we sat down in the control room for the interview. After the interview, Andrew had me listen to samples from artists who have recorded / mixed there. The music was from different genres.

The interview and conversation was not entirely serious. We did joke around at times. Overall, for my first time walking into a recording studio for dual reasons: I loved it!

This was the first time I did an interview with the serious possibility to become a customer / client. Andrew did great on both sides. Honestly, he did not come off as trying to sell me on Midnight Studios. On that side, he just showed me what he did and the facts.