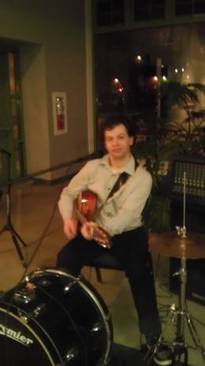 IntroductionThe first time I met Josh, he was performing at the sangria with Jazz artist June Thomas. I was only beginning to do music reviews. I never listened to Jazz and wanted to check out Ms. Thomas. After speaking with Josh, I decided to check out one of his shows. It took me several months, but, I finally did. Check the link for review. After several more months, here is the interview I had planned.

Josh is a unique musician in several ways. He is a one-man band who records loops while performing. If anyone does notice, they do not care. Another reason is he can take ordinary life and turn it into an interesting (sometimes funny) song. If you want to know the rest of the the reasons, check out my review.

Time for the interview. Not completely in the standard q&a format. Easy, standard question first.


Place: Allentown Burrito Works / Date: 01/31/13I started with a curious, common sense question: How did you get interested in music?

Josh: "My uncles were both in a cover band. It was in a bar and I got hooked on it. I have been playing guitar ever since."

So you started off with a guitar? Josh: "Yeah." What age were you when you first fell in love with music? Josh: "Riding around in the car, playing air guitar / drums. I was 3 years old. I remember being on a long car ride and saying, "Let's put on Stairway"." A slightly off the wall question I had: What was the first song you fell in love with (radio / popular)? Josh: "It was definitely Stairway to Heaven. It was just in the cd player. The first song on the radio, guitar solo from Freebird. ZZ Top, the whole guitar style grabbed me. I was maybe 4 or 5."

I was curious about Josh's thought on the evolution of music (technological side / vinyl to mp3). I did make a joke about 8-tracks here. Referring to that as the in between stage where no one could figure out a better transition. Josh: "There is definitely something to the crack and hiss of vinyl, especially the old jazz. It's very different to listen to the blue on vinyl vs. being downloaded from I-Tunes. I think the newer music is almost meant to be on mp3. Now we can record so much cleaner. In a way I don't mind it. It's not meant for that old stuff. You have old music, you should listen to it the way it was recorded. I think that's the truest form for any piece of art."

There was a reason for these questions. I read an article that some club Dj's are going back to vinyl. The article stated that vinyl is cleaner. Josh added "Cleaner and you don't get malfunctions. I've been on a gig with keyboard players who are plugged into a mac and it will shut down right in the middle of a gig. The pros are the ones who have their, old school, keyboards with them. I do a lot with my p/a equipment. I still use my old Mackie from 1991."

At this point, I wanted jump into Josh's music and style.

I remembered the first time I saw Josh at Hava Java (local coffee shop). Josh reminded that was not the first time. The first thing I noticed about his show was he records loops and parts of the show as he is playing it. The first time was when he played with Jazz Musician, June Thomas.

How did you develop that style? Josh: "It came a lot from recording. When I was in Boston, a place payed you for recording. If you mess up, they don't want you back. I had to learn quickly that you play it and play it right the first time. From that, I thought, if there is a way to do this in the studio; then, there has to be a way to bring it to a live show." How did the style (loops) evolve? Josh: "It went from a prepared guitar" (see notes below). At this point, Josh mentioned his guitar teacher from Berklee, Dave Tronso. "I took what I learned and adapted to my acoustic. How could I get, with my loop machine, a nice nice drum set. How can I do a bass drum, snare, etc. I wanted to add different things like a slide whistle. It sounded great in my office." There were a few, technical difficulties at shows. "The monitors would bleed into the microphones. I needed something more advanced that would not feedback. I needed to simplify. To get where it was not coming out of a microphone, but instrument. If there is anything going into a mic, it's just my voice, nothing else. That would evolve where instruments were going on and I would beat box a little bit." Again, I pointed out, most people do not seem to notice when he creates a loop. Joking around, "I think I do that too smooth. I think I need to have people in the background with just instruments." I mentioned he could start a new trend: music syncing, like lip syncing only with instruments.

At this point we took a quick break. I did a quick close on the recorder and prayed the file saved.

Before i could ask, Josh mentioned the music influences through his life."Definitely the Beatles, George Harrison and John Lennon." We went into a quick discussion about the Beatles. "I mentioned John and George. I am a guitar player, John was a guitar player mostly." You mentioned Stairway to Heaven. Are there any bands, post Beatles that influenced you? Josh: "I mentioned my uncles before, they were huge Jimi Hendrix enthusiasts. Classic rock is, definitely and influence."

You have a lot of formal education in music. Can you tell us about that? Josh: "It started, technically, when I got my first guitar. My uncle, Rick (In Memory), taught me how to play Wipeout on a little, baby guitar. That was my first guitar lesson. That is when I fell in love with it. It took about a month to figure out that tune. My mother kept encouraging me not to give up. Once I got it (snap), I got the bug. From that point, I got some real guitar lessons. Started playing in my neighborhood. From there, I wanted to get into jazz band in high school. I was stuck playing the clarinet. Playing clarinet is fun. It kept me out of doing other things. (Joking): 30 minutes out of math class was pretty cool. By the time I hit high school, I definitely wanted jazz band. I did get in. I continued lessons with the rock teacher. I was taken under the wing of Paul Wingo and Walt Johns. I was looking towards college and realized I needed jazz and classical background. Walt was my classical teacher." From early on, you had a completely different background. Josh: "Yeah. I started rock and blues, went right to jazz then classical. By that point, I decided to major in music. I am going to find a way to make it work. It's my passion." You did have a lot of family support? Josh: "My family was really good. But, if you are going to do this, you have to find a way to make it work for you. You are just not going to be a guitar player in a band. That is when I got into music ed." They tried to guide you in the right direction? Josh: "Yes. Even in high school, I told my music teacher: you are starting up this course, can I help. I became a student - teacher." Teaching comes naturally to you? Josh: "Yes. I have been doing it since I was 15." "In college, I did not want to just take music ed. classes. I wanted to learn world music. I wanted to find out the differences in music of different countries. I wanted to learn that. At college, I was a professional music major. I also learned different instruments. I also attended two, different, colleges."

Jumping to a slightly different side, the conversation moved to his teaching. I was curious about his current teaching in the Lehigh Valley.

Josh: "My girlfriend got a really good job in the area. I needed to work. I was scouting every music school and program in the area. Community Music School was one of the two places I liked the best. Community Music School because they give scholarships. It means something to me to teach students who want to learn music. A trumpet player lives in a horrible section of Allentown. If he would not be at the music school, he might be doing bad things. The teachers are professional. Two played with the Philly philharmonic and Allentown Symphony Orchestra." The main obstacle Josh encountered teaching in Pennsylvania was transferring the credentials from another state.

One other thing I was curious about: original music. You make ordinary things seem interesting. What gave you the idea to start doing that? Josh: "I think, originally, Frank Zappa. Some of his songs have this deep meaning. Then right around the corner, there is a joke. I just think you can't take yourself too seriously. The ability to make it sound like a pop tune is from listening to a lot of different things."

I had one, final, question. What is the hardest challenge you face right now? Josh: "Booking and promotion. Finding the time to do it."

At this point, the interview closed out with some general conversation.

Closing Comments / Definitions: I want to thank Josh Klein for taking the time for the interview. It was seriously a lot of fun. It constantly went from serious to joking. Josh did great with my conversational style of interview.

Thank you for reading my interview with musician Josh Klein. Feel free to leave comments or contact me. Check out Josh Klein on the internet. If you are in the area, go to one of his shows. Be prepared for a different and enjoyable experience!

Prepared Guitar: Josh: "Originally developed by John Cage for the piano. He would place nuts, bolts, and try different things to make them sound different. My guitar teacher from Berklee, Dave Tronso, developed it into a guitar technique."