Remember a song from the 80's: Catch Me I'm Falling? Even if you are too young, look it up. Jade Starling / Pretty Poison performed a short show on 09/26/13. No, tickets were not available, it was free!

With the show time starting at 9:30 with DJ Tom Taylor (another review); I arrived shortly after 9. I had 2 short conversations with Ms. Starling on Facebook prior to the show. On the day of her show, I was informed it would only be a few songs and not the entire band. No problem, especially for a free show.

When I arrived, the first surprise was already happening (coming up). After introducing myself, Ms. Starling informed me she was told her part of the show would start at 11:00. Again, no big deal. I was planning on using my criteria and doing a full review. I can pull this off with one set. Less than that, no chance in hell. What was intended as a full review turned into a full article. There is a difference.

The first surprise that caught my attention lasted after her show. Ms. Starling was easily available and approachable. Instead of staying backstage or in a VIP section, she was in front of the stage talking with people. When I arrived, I ran into a friend: JR. He was talking to her at the time. A little later: "Go up and say hi". After a few minutes, I did!

A quick note on my view of celebrities. They are human beings like everyone else. Other people are the reason why they are celebrities and famous. Yes, if I ever hit that stage, my belief will not change.

Back to the show and Ms. Starling.

OK, I can not resist a very short summary based on criteria. 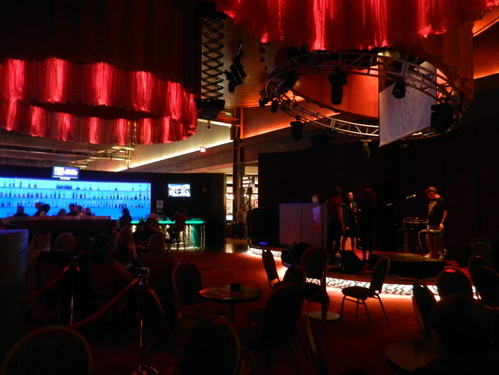 Stage show / energy / crowd interaction: Excellent!
Ms. Starling really earned this rating. I am not being nice here. In the short time she was on stage, her energy was very high. She moved around the small area and used every inch available. Only about 1/2 the stage was available, period (see photo and full album). Ms. Starling found a way. Her crowd interaction was almost beyond excellent. She thanked everyone for coming out several times. Her words: "Especially on a Wednesday". A list that was not short was thanked for supporting her. Again, not being nice here. This was what really caught my attention and gained Ms. Starling a high level of my respect. More on that in a few.
Crowd energy / response: Honestly and overall, it was low. I am not making excuses or kissing ass here. This had nothing to do with Ms. Starling. Seriously, check my review of Molten Lounge including Tom Taylor. If I really go into it here, it will be long. Even though Crowd Response could have been a lot better, Ms. Starling did pull it off on an average level. When she tried to get the crowd pumped up, at times, there was a high level of cheers. It was the crowd energy level that killed it. Like I said, check my review of Molten / Tom Taylor.
I told you, Jade Starling was available before the show. Announcements were made she would be available for a meet and greet / photos after. In case you are wondering, no charge!!!!! Not even taking a break and right after the last song ended. The photos began; first on stage then moving back to the VIP section. A small booth at the back of Molten Lounge.
I was going to skip this part. Hey, I was here to review the show. I figured, what the hell. At least let Ms. Starling know she did a great job. Waiting in a short line, I had a chance to speak with someone about it. She loved the performance. In our conversation, I mentioned about how Ms. Starling was making sure people could speak with and have photos taken with her. The lady agreed with me. I could tell by her expression she was as impressed with this as I was.

I sat with Ms. Starling and Vince Andrews (DJ / Chemikal Entertainment Group). I did say the her performance was excellent. I also informed her about how impressed I was with the meet and greet / photos. How she did not have a problem speaking with people. Her response: "They are the reason I am still around. Look out there. See the reason I am here. The fans are important to me." I know, this may be an expected response. Her actions and a look in her eyes proved it to me. Yes, I can pick off if someone is genuine or just giving me a line in a heartbeat, very serious. Vince is a really cool and down to earth guy. I have to give him credit here.

Honestly, Jade Starling's show was one of my top 3 events for this week. What was supposed to be a full review per established criteria. Evolved into an article that covered more.

Again, not being nice or kissing ass here. It was a serious pleasure to meet and speak with Jade Starling. The person, not the celebrity.

I almost forgot. She has a new single out now (Insomniak) and full CD due out October 15. A music video will be filmed this weekend. This is her first, solo, CD / Album.

Overall recommendation: See one of her shows. If you have a chance, say hi! She is very friendly and does appreciate her fans / support / people who go out.


Have your interest yet? If not, I really did something wrong! Just kidding, I think.