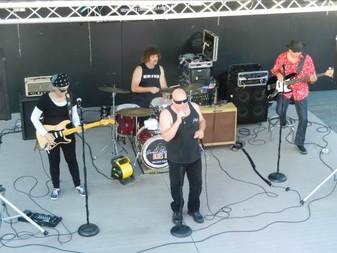 This is a short review using my old criteria. Originally published in the June 19th edition on Smashwords / Amazon.
Maingate’s Bike Night was the place for this review. I have seen the band several times in the past year. Nature decided to be nice and have a perfect evening for an outdoor show. There is a quick article on Bike Night in the “Around the Valley” section. For now, I want to focus on the show. The date? June 4.

The show had very high attendance. Keystone Harley Davidson was present with 2 bikes on display and information available.

If you have never experienced James Supra Blues Band, do not expect the traditional blues. The band combines genres to give a unique and unexpected sound. It is more of a combination blues / rock. The slightly harder rock edge came through on covers: Come Together and I Just Wanna Make Love to You. The original, Tip My Hat to the Maker, really has a Won’t get Fooled Again (The Who) feel to it. James’ harmonica playing is always a highlight. In a review last year, I said he does with a harmonica what Hendrix (Jimi) did with a guitar. I stand by that statement. Of course, the more mellow, storytelling of traditional blues was there. Originals, including Philly Stroke have “traditional” blues music. They also have a great story in the lyrics.

The crowd? I am realizing Bike Night is not the best time to do a full review. Everyone pretty much shows up just to have a good time and relax. Oh, and have a few drinks. Crowd response was good on songs, the dance floor was light as usual.

Overall, James Supra Blues Band did put on a great show. The variety of originals and a few covers were pulled off great. Crowd interaction was very good with conversations in between songs. Set breaks also included crowd interaction with band members going out and talking to people.

One thing I want to point out here. The band plays from the heart. With every song, note and word performed with a love of the music.