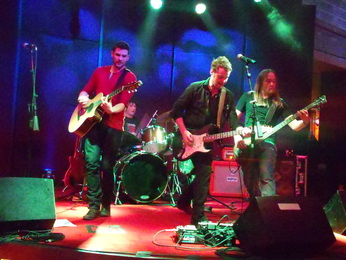 This is a review of the JJ Rupp Band from their show at sands casino on March 20th 2014.
The band members are:
JJ Rupp~ lead vocals/Guitars
Tony Kobel~drums
Richie Hume~lead guitar/Vocals
James McFadden~bass

JJ Rupp band is a new band that got their start earlier this year.
The crowd was small but it was a Thursday and most of the time unless its a particular band playing Thursdays at sands is not usually busy. With that being said the moment I walked in (witch was about 15 minutes or so after they started) there was a few people up and moving and this was the sight on and off all night.
The crowd response was good clapping or cheering after most songs. The band was introduced in full at the end of the night but each member was introduced several times during the night. Multiply times during the night the band not only thanked everyone for coming but made comments directed towards particular people in the crowd. Leaning down singing in the face of some of the fans faces. When not playing his guitar John is constantly running from one end of the stage to the other while singing. Even the crowd that remained in their seats during the show seemed to be moving a bit and listening to the band. (One of the band members noted to me that the smaller crowd seemed to be listening to the songs more than some other nights)
We would recommend them to people that likes a variety of music.