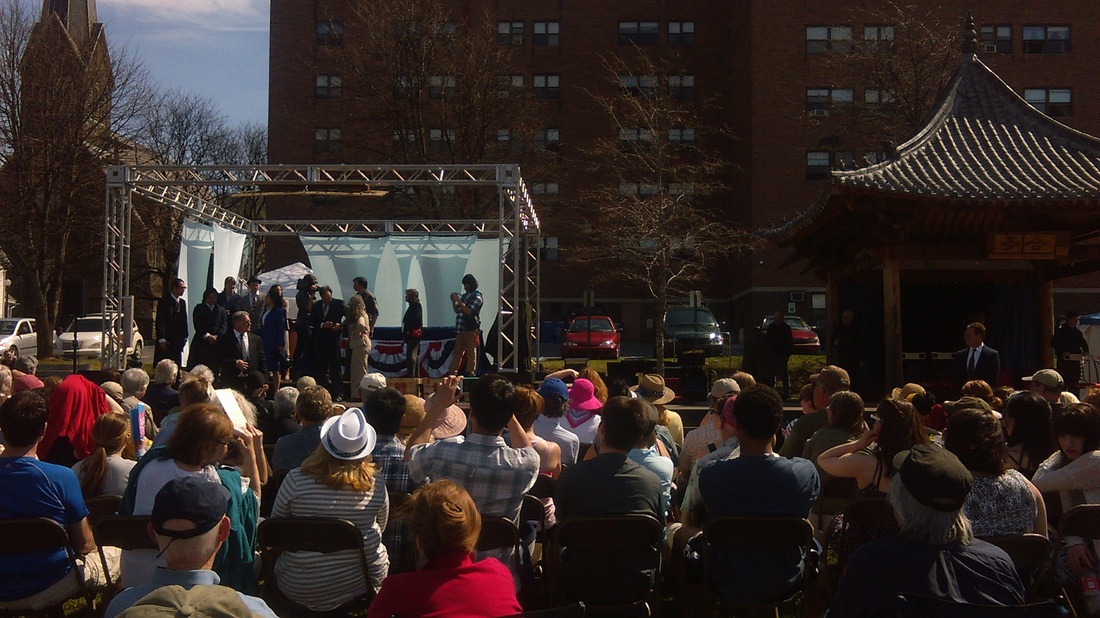 In 44 years, I had a lot of strange, unique and explainable experiences. Since January 2012, covered a lot of different and unique events. This one definitely tops the list! Saw the event on Facebook and placed it in the top priority list. By chance or fate, I found it and the Greenway at the Spring into the South festival in Bethlehem.

I figured, not a problem, new experience. Never been a real fan of live theater, so why not? I had no clue the true immersive experience this would be!

Right off, thank you to nature! She provided a PERFECT weekend for everything! With temps in the 70's a light wind occasionally blowing and sun shining, I did not realize it already started when I arrived. A few minutes late from covering the festival, people were seated and standing. There were 2 stages with people talking and men in suits standing in front. Ok, this is unique so far....

Standing in the back, it was one surprise after another right off. At one point, volunteers in the audience were loaded into local school buses and taken to an unknown location. Really did not check out the event in advance. I love the surprise factor. With half the crowd cleared out, the production continued in modern day. The next surprise happens here...

We are transported to the old West and frontier days of the United States. The main theme continues, even though it is now in the distant past. Honestly, it worked perfectly! There was very little adaptation or major changes to the theme. The old West is where a majority of the story line happens. Ending in modern day. Sorry, not giving away specifics.

One of the first things I always look for in any form of art (music / live theater / even paintings at times) is the immersion factor, especially with live music and theater. Is the audience only sitting there and observing?  Or are they a part of the event? Journey from the East has one of the highest immersion factors I have ever experienced!!!!! From the start, while the actors / actresses are having conversations with each other, there is also a dialogue directed at the audience. Just like you are at an event where the president is arriving / present (hint at the plot). Again, the first major surprise: volunteers from the audience were loaded onto school buses and taken to an unknown location to experience the other side of this story. Yeah, I could tell these were not pre-selected or actors. I did speak with someone who did go on the bus. No clue as to what happens at the other end. Only thing I was told: Definitely have to go on the bus.

The overall plot / story being set in 2 different time periods could have seriously backfired. The way it was done, worked perfectly! 2 acts and an intermission over 3 hours, I found myself constantly wanting more and the next part of the story.

I will get back to the immersion factor (the biggest part for me) at the end. The main characters showed how much they could learn and develop over time. Learning and adapting to new environments. One of the main lessons and struggles for the two sides: overcoming prejudice and predetermination of other races and countries. During the production, I began to realize how easily it can be to fall into these traps for anyone. The conflicts and lives were easily conveyed to anyone's life.

Combing an immersion factor where the audience was, literally, a part of the show / excellent acting / simple set / lessons that should be applied to our societies and world gives this a rating of #1 to experience on your list!!!!!!

Again, especially with being transported on school buses, the immersion factor was on of the highest I have ever seen. Making the audience an essential part of the show vs. just observing it. Also, at points, I was almost seeing the story develop during that time period vs. standing in the back of an audience on a sunny spring day.

The level of acting was to the point where each character not only pulled from the script and research, but their own experiences and lives.

The set was simple. Two small stages with characters moving between them. Any changeovers were very fast and the performance in other areas drew your attention away.

At times, an intense story which was well researched showed how prejudice / discrimination and other archaic concepts have not changed much over the centuries. The major plot twists teach us, sometimes, only a major event can be the catalyst for needed change.

Out of everything I have experienced and covered in 44 years, Journey from the East is one of the most unique, different, and for lack of a better term: WOW / UNBELIEVABLE experiences ever! This is must experience for everyone!