The friends and fun continued with some great music

With the actual holiday down, Friday was a sort of break in the action for me. An interview and stopping by Alternative Gallery's Pop Up Mart at First Friday pretty was pretty much all the action. Do not get me wrong. There was a lot I missed, including Sarah Ayers Band in Easton. Saturday had even more happening in the area. Starting with a quick stop at Alternative Gallery's Outdoor Art Mart for July. 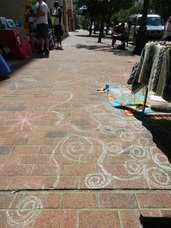 Basically, the Outdoor Mart is on the sidewalk of Hamilton Blvd, right outside the gallery. You can see artists of different genres and styles creating new works. Every Art Mart I have been to is slightly different. You will not always see the same artists / vendors. This one included: painting, jewelry, sidewalk art. You also have a chance to meet the artists and buy something you like. First stop and art down, time for the music!

Great music with around 3000 people 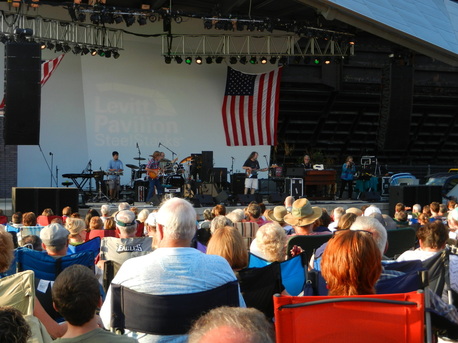 The Craig Thatcher Band started at 7. I arrived at SteelStacks about 6. Dina Hall and Christine Havrilla started things off with an acoustic show on the Artsquest stage. My first time at Levitt Pavilion for a show and could not believe the amount of people already there. Already figured I would have to get a little creative for photos / video. I grabbed dinner at Mack Truck Stop by the stage. Typical burger and fries, pretty good choice. What I did not realize was the large following the band has.

Shortly after 7, the band hit the stage and, after a short intro., the music started! Due to the 90 minute set, I could not do a review. Craig let everyone know the band will be playing straight through. Even apologized if he did not talk to the crowd that much. The band wanted to get in as many songs as possible. There are a few points I want to make. Here is a quick idea of how good the show was.

Even though the band focused on music, at times, there was some crowd interaction. Band and song introductions, a little bit of conversation with the crowd pretty much covered it. Crowd response was very good. People were dancing in front of the stage, people showed how much they loved the songs with applause and occasional cheers. Chants of "One more song" were loud at the show's end. The band and variety really caught my attention. The main surprise with the band was a fiddle. This added a new aspect to the music and show. Even covers like "With a little help from my friends" had a new sound because of the fiddle. The music variety was the other, main, area that impressed me. The band really mixed things up with a combination of covers / originals, fast / slow, jam session / lyrics. The main surprise in this area was a Celtic song! The band almost seemed to get absorbed in the music when they started jamming out.

Overall, for my first time seeing the Craig Thatcher Band, it was easily worth it. :) This leads to the end of Saturday, July 6th: The final band was The Sofa Kings. I thought Craig's band was large!
In between bands, I walked around and asked a few people about the attendance. Two good friends, Mimi Gloria and Geno Barron, informed me 3000 people had shown up. Mimi and Geno are members of the Greater Lehigh Valley Music Association. The GLVMA actually sponsored the show. I wanted to confirm this number. I asked a few of Artsquest's volunteers and staff. Yeah, 3000 people showed up on a hot summer evening to enjoy a holiday weekend with live music! Weather report: clear skies all day with temps in the 90s. When Craig Thatcher was done, I thought the crowd would thin out a little. Wrong! some people left while others arrived. I think the numbers held until the very last note. 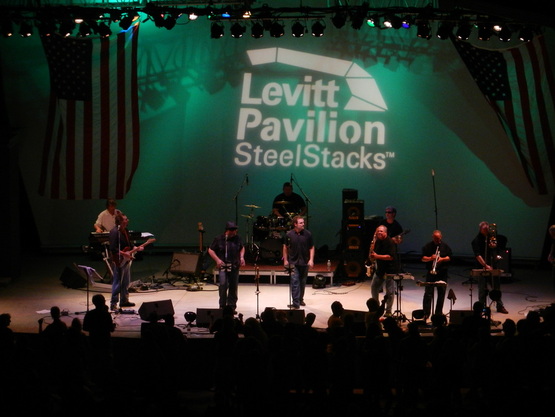 The Sofa Kings is more like an orchestra than band. The band included a horn section, guitars, keyboard and drums. I know, you are looking at the photo. Like the Craig Thatcher Band, they did a 90 minute set. I have seen The Sofa Kings last year at a club. The stage was smaller and the show average. This time, the band really showed what they could do. Again, I will not be doing a full review due to the short set.

Music, crowd interaction and high energy are what provided a great mix for this one. The band had a great mix of covers. They started on very high energy and did not back off. The dance / party combo spanned multiple decades, from the 70's to today. The crowd easily responded by keeping the dance section very crowded. I could not figure out how people were able to move around, but they found a way. :) Even the audience not on the dance floor was moving to different songs. Some of my favorites? Footloose, Let's dance / Let's shout / (Your love) keeps lifting me higher. In the spirit of Independence Day: Bruce Springsteen and Lynyrd Skynyrd. The crowd interaction was high with holding the mic on a few songs. Towards the show's end, asking people what they wanted to hear. Crowd response? The dance floor part should give you a major clue. Yeah, I was moving and almost dancing to a few songs while paying attention to the band and crowd.
Overall, Saturday was a great continuation for my 4th of July weekend. Starting with fireworks on Wednesday. A history lesson / James Supra Blues Band / street festival / fireworks on the 4th. A little bit of a break on Friday. Arts / music on Saturday. One, main, event left. This one would be all day. The last new experience for my Independence Day weekend 2013.