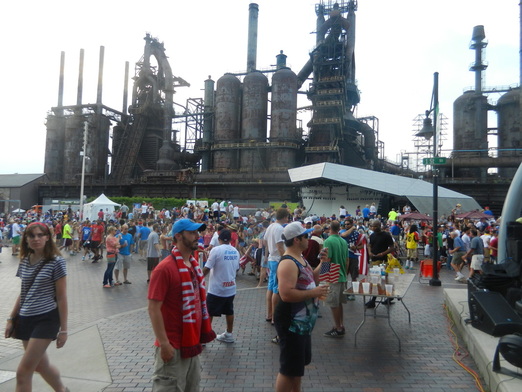 Ok, I will admit something here: not a sports fan. Even though this started 3 days prior, it was low on the priority list. A friend suggested we stop by and with Common Bond playing, why not? Talk about a shocked / speechless look on my face on arrival! The entire area was packed with people cheering on the U.S.A. Still have not figured it out. I understand the getting behind your country part. Guess I am not a sports fan.
I have to give a lot of credit to the staff and volunteers of ArtsQuest. They did a great job on handling the crowd with service and helping out.
Here is the low point. Even though I was told ArtsQuest was not expecting the amount of people, they dropped it in one area: security. At every event I have attended, as soon as someone stands on the rail, they are told to get down. At one point, I saw people standing on the rail with two volunteers right below them selling sodas. After speaking with a member of the staff, they informed me: We were trying but people just got back up there. Never heard that one at any other event. With the amount of drinking people were doing combined with families being there, there should have been a lot more security walking around.

With the United States winning their first game, hopefully, it will be a more controlled event on Sunday. Including cutting people off where I noticed some were intoxicated. ArtsQuest should have learned a valuable lesson from this one.

I have to point out one thing: other than someone stealing and trying to get away there were no incidents.
Local band, Common Bond knew how to end the night. With a combination of covers / originals, they kept around and into the festive mood!