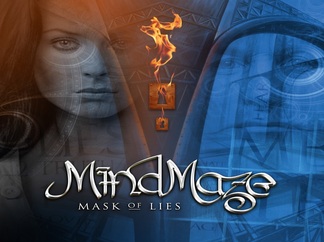 Image used with permission from MindMaze. MindMaze retains all copyrights.
I will not be going into heavy detail about the physical Cd here. Just in case you bought the mp3 version. On thing I really love about the inside cover: lyrics are included. A nice bonus!

If you are looking for a track - by track breakdown, sorry. Not going to spoil the surprises for you.

The Cd starts off hard and fast with a great track: Never Look Back. A great way to introduce the band and disc. The song lets you know that MindMaze is a serious band. The lyrics: There is only one direction the see and will move in.

Never Look Back is followed by Breaking the Chains. Continuing the story started with Never look Back.

This Holy War is one of the songs that prevents all songs sounding the same.

The song Destiny Calls: What more can I say?

Last song I want to mention: Remember. Like Never Look Back, a song everyone can easily relate to. Listen to both and then look at your own life. Am I wrong?

The change is not only between both songs. It also happens in Breaking the Chains. 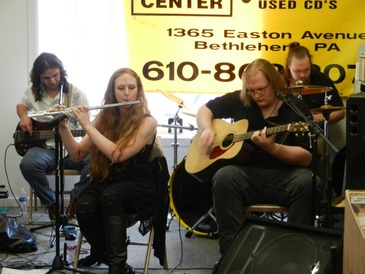 Acoustic Performance on Lehigh Valley Record Day. Place: Compact Disc Center, Bethlehem PA.
Thanks for the quick summary. What about the instruments / vocals?

Sarah’s voice carries all the passion and power that any rock / metal should have. Not only singing but feeling each song is easily noticeable on every track. Jeff and Rich on guitars? They know what the genre really is. Not the watered down / commercial version it has become. The true hard rock / metal of the 70’s era. They bring the guitar and bass to life. Making the instruments have a voice and sing. Kalin on the drums? More than hitting them at the right times. Without Jeff’s keyboarding on Remember, the song would be missing a major component.

The combination of hard beats and softer taps help give each song meaning and emotion. Passion / Power / Emotion in rock is something forgotten by today’s commercial music industry. A memory they really should retrieve.

One thing I look for in every album. Is there a story and reason for each song? Are they organized for a reason or just what sounds good at that point? Mask of Lies not only has great music. It also tells an excellent story. The individual titles give you that idea. Listen to each song and then as part of a story. The lyrics tell that story. The music sets the moods / brings it to life. I did close my eyes while listening. Curious if I could visualize the story. It was not that hard.

Major point: there is a good variety between the hard / fast and slower music. Not only in different songs. You will also find the pace changes during one song. Some bands can pull this off, some can not. MindMaze pulled it off perfectly! Listen to tracks 3 - 5 to really prove my point. Huge surprise here.

Major point: Storyline. Yes, there is one. It does make sense.

Minor Low point: Even though I stated there is a great variety, I did find myself slightly zoning out at one point. This occurred on the second straight playing. It was around the halfway mark. A few of the songs did start sounding the same. Again, while listening to it back to back, without a break in between.

Major point: I did not get bored or find myself thinking: “Ok, can we get to the next track? Is is over yet?”

Honestly, I could not think of one major thing wrong / did not like about Mask of Lies.

Mask of Lies is one of those rare albums that tells a story throughout with each track continuing that story. Does each song stand on it’s own? Hell yes!!! With the arrangement, they have even more meaning. Best way to describe the Cd: High energy / Passion / Power / True Rock and Metal. Do not be surprised for Mask of Lies to make your all-time favorite list. Or a least one track off it. Mask of Lies is more than just digitized music. It has life and a true heart / spirit.

Between their live performances / Mask of Lies. MindMaze is ready for their break into the major leagues. If you think I am wrong, let me know.

Notes: 1) Yes, I did listen to the Cd more than one time for this review. Do I have any favorite tracks? I loved the each one. Ok, Never Look Back and Remember. I have one rule with local bands: I will not review recorded music before I do a live review. MindMaze is not an exception. I went to 3 full rock / metal shows. I also saw a rare acoustic performance. Yes, I would love to hear a full, acoustic, version of this Cd.

I had very high expectations for the recorded version. The reviews are in my book: “In a Valley… A Writer’s New Beginning”.

Important Note: The Cd was not provided in exchange for a good review. I will never do that. The review is honest and neutral. Like all reviews, a person’s opinion. You may or may not agree with it.

Now that I really have your attention!!!!!