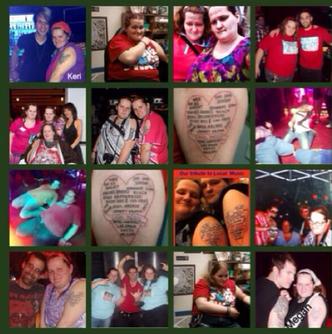 We thought we would take a few minutes to tell you about us our names are Megan and Keri Reese.

We have been dubbed "The World Famous Reese Twins" by the musicians that we go to see. This nick name was giving to us due to the number of bands that we go to see and the fact that there are some musicians that we have never heard of that when we go see them for the first time they will be like oh hey I've heard a lot about you guys. Ok I know some of you out there would be worried when you hear that phrase but for us it's usually due to the fact that when we are out at the shows we are taking pictures and video.

We also get to know the bands that we go see. There has been many times when we have known parts of the bands schedules better then they did. We even had one band member tell us that the one time when we knew better then they did made them wanna learn there schedule better. And unlike a lot of people that goes to see bands we don't get drunk and act crazy. Any craziness you see from us is just us letting it slip out from time to time.

You might witness us "get low" at show when the song plays or some other dance moves that go with the song that's on. The bands we go see have learned to expect the unexpected from us like maybe walking in to a show that has already started wearing flashing devil horns or wearing a shirt to a show that we know they will get a kick out for one reason or another.

We have always liked music since we were little kids and as we got older our like for music started to develop in to a love the first live concert we went to see was Dreamstreet at the Phillipsburg mall. And then we went a few times to Mayfair and then a few other things for the next few years after that then about 2 and a half years ago we started to go out on a regular basis to see bands out of all the bands we watch Johnny Drama was the first one and then just a week later we first saw Go Go Gadjet and ever since then the list just kept growing from there.

These days you can catch us out and about at least three times a week. We even have matching tattoos that are hearts with the words local music & the names of a bunch of the bands we watch. So if you like what you read or see look us up on Facebook under the world famous Reese Twins.

Hope to see you all out at,
Megan and Keri Reese