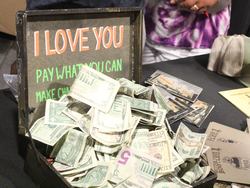 The day kicked off the days festivities at noon with a family fun fest outside in the parking lot. They had several games set up for the kids. Music was provided by dj Cap Cee who keep the crowd entertained well past 5pm.

The indoor stuff kicked off  around 5pm with the Adam Ezra band playing ruffly an hour long set. Like most touring bands they had merchandise for sale but what set them apart from most of the bands is how they sell the cds that is that they sell them using an "I love you" box. Before starting their last song Adam he said that after this song am gonna walk out that door where there is a table and on that table there is cds for sale for $10 next to those cds there is a "I love you" box in which you can put your $10 and take a cd but if you only have $5 put that in and take a cd any way and if your down to your last dollar ill tell you what keep that dollar we don't want it but take  a cd anyway music is meant to be shared. For the rest of the night he was available at his table to sign the cds or walking around talking to people and we even heard him tell groups of people that where together to take different cds and  burn them for each other.
After a lengthy break The Wailers took stage in where they where suppose to play about 90 minutes but they cut themselves short by about 15 minutes. However while they where up on stage the had most of the crowd swaying with them.
After another break the rusted roots took stage to end the night with about a 2 hr set scheduled. Walking around the back and sides of the crowd you see how the crowd was into the group. You could see the crowd on the floor singing along and dancing. You could see the little kids on the sides of crowd dancing and playing with glow sticks.

The whole day was a free event.

There are pics and videos from all three bands.