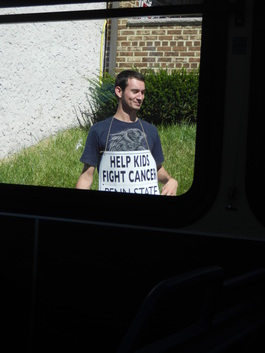 Yes, I did take this from a bus.
After seeing this, it deserves a short article. How many times do you see, in the media, what is wrong with this world? How many times do college students get a bad stereotype? Well, this one should reverse it a little.

I was taking a Lanta Bus to Tri-Boro Sportsmen's Club to cover a benefit for Diabetes. When the bus stopped at 9th and Main, I noticed young people with signs standing outside Mario's Pizza. I immediately thought: "Another protest". Yes, I did stereotype.

After looking at the signs, I was dead wrong. Students from Penn State University were doing something to help out kids. One man who got off the bus made a donation. While the bus was stopped, another reached out the window to make one.

Arriving at Rt. 329 and Main, I noticed more students standing and accepting donations. Ok, this was more than just a live update.

I took a photo and let one of the students know what I was doing. I also gave him and the others my high respect and admiration.

Returning to 329 and Main, I asked another student if this was just the Allentown Campus doing raising money? Penn State has campuses in different cities / town in Pennsylvania. Answer: "I go to the main campus (University Park)." Into a short conversation: "Is this only happening now?" Answer: "No, we will be doing it in October and November. The dance is in February where they announce the total. Last year, we raised $12 million!" He had a smile when saying this. I do not blame him or any of the students for raising that total throughout the year.

On a beautiful, Autumn day these students could have been doing anything: Studying, out with their friends, just enjoying the day. They chose to stand on street corners and collect money for kids with cancer. If I had to guess, they were doing this for at least several hours. I did observe people in cars and commercial trucks making donations. The students of Penn State are setting a great example for others to follow. Again: very high respect and admiration for doing this!!!!