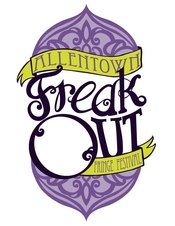 The annual Freak Out Fringe Festival is coming up this weekend. After attending last year’s event, it is very hard to describe. The Freak Out is also a top event on my list for the entire year! The best way I can describe it: a combination of burlesque / belly dancing / fire and lights / vaudeville / pre-movie entertainment. In other words, you pretty much have to experience it.

All this may lead you to think it is only for adults. Your kids will also have a great time. Even have a look back into the distant history of entertainment. Long before video games, phones, computers and TV’s. Yes, there were things to do before modern technology! Had to put that one in. You will also experience the true art to each genre. By true art, I mean each part is also an experience in a different and possibly forgotten form art. Performing art takes center stage as Allen T. Freakoutz gives us an idea of how this festival started. He also tries to describe what most words fail to: The Allentown Freak Out Fringe Festival!

One of the hardest questions first: What, exactly, is the Freak Out? Allen: The Allentown Freak Out Fringe Festival is an event held in center city Allentown. It’s an arts event. Primarily, performing arts event. We call it a Fringe Festival because we like to push the envelope of what art is. It’s free to the community. A Lot of the community thinks of art on a wall. We are pushing the envelope for them. Saying: “What about performance art? What about installation art? What about fire dance?” We put kind of a neo-sideshow twist on it. We bring in that circus element. We bring in sideshow, burlesque, etc.

Allen: These are performers who are artists. The spend a lot of time training and learning what they do.

I had to find out how the idea came into existence. Allen: First off, I have been to a couple of fringe festivals. Me and my wife have been living in Allentown for a couple of years. We felt like there wasn’t a downtown event that really reflected the community. We felt like it needed something different. We thought a Fringe Festival was a good fit. It’s grittier and fit the urban environment. We already had contacts and friends that were into different types of performing arts. We said: “Hey, let’s do this! Let’s put it together!” Basically, we wanted a good downtown event.

How long has it been going on? Allen: This is the 4th year. It started in 2010. Curious about if the event is evolving or basically the same every year. Allen: Over the 4 years, it has grown. As far as number of people showing up. Changing: it’s starting to hone in. The very first Freak Out, we went pretty broad. The scope of types of performances. We had more venues and things like that. It proved to be very challenging, of course.

What challenges are faced, especially in the first year? Were there any challenges with the city? Allen: No. Actually, the first year the city was very helpful. They had some questions for us. We told them everything. They were really nice about it.

Allen: We made a point to keep everything on private property. We like to work with the businesses in Allentown. Part of the point of this event: We wanted to get people to center city. When we started this event the BrewWorks was the only place in Downtown other than a couple of small businesses. We wanted to bring people into downtown and say: “Look here is a venue!” Work with the businesses. We kept it on private property because there is a lot more headaches when you close down sidewalks and streets.

Allen: We didn’t want that. We still wanted that city flow. We wanted people to be passing by and join in the event. You probably get people walking by who didn’t even know about it. Allen: That happens a lot. I think the decision to not close down the street was one of the best ones we made. We juggled with that the very first year. I think it really has brought more people to it. I think, just driving by, and seeing someone hanging upside down in a straight jacket. That will make you get out of your car (both laughing). When you first think of a Freak Out or Fringe Festival, it’s only for adults. Not this one!

Allen: Most of it is geared towards family. We want all ages. We have stuff outside. That is for family. The sideshow has a gross out factor. A lot of times, kids love it. It’s probably their favorite thing. They love the fire dancers and things like that. We do burlesque. We keep that in Silk Lounge at BrewWorks. It’s 18 and up. You could bring a kid, it’s PG-13. We don’t push it that far. We don’t need to. I feel things we bring in are eccentric enough. We don’t have to push it over the top.

When does the event, actually, start? Allen: Every year I say we are not going to do it on Friday night. Then something comes up. I think: “That would be great on Friday night!” Giving us a preview of the 2013 events…

Allen: This year, we are going to have an arts opening at the Schoens building. Next to the Zion’s Church, 612 Hamilton. Fuse Art Infrastructure is going to curate an “Installation Art” exhibit in the empty downstairs. The exhibit will open on Friday night at 6. Then we are going to have a “jam” style band playing on the main stage. Projected on the wall, across the street: Little Shop of Horrors, the old black and white version. We coordinated with Lehigh Valley Art Wars. They will be doing Art Wars, across the street at BrewWorks. There is going to be a lot going on Friday night. Saturday, things start at 3 - 11 p.m.

Over the past 4 years, are more people and groups becoming involved? Allen: Yes. As things got closer this year, I reached out to people. We had people starting to reach out to us. Here is a good example: I got an email from the Lehigh Valley Roller Girls. They said: “We would like to volunteer at events, sometimes. Can we help out the Freak Out?” I would love to have the Roller Girls here!!! (big smile). We have always had an information booth. Never the people to be there. They are going to roll around with programs. They will be at the information booth. We had a graphic designer, Tanya Lucas, who said: “I’d like to do all your graphic work this year”.

Do you see the Freak Out growing / evolving more? Allen: As far as size; we could see it growing a bit. We have no plans to make it huge. Or take over the whole downtown. Or anything like that. That would, probably, be too insane to manage. Allen: Yeah. For me, I would like to see a couple of more venues involved. I would like to see the point (fundraising), where we could pull bigger acts. Acts from California or New York that would cost more money. Those are my biggest goals. To pull in things that are unique and cost more money. We just can’t do that yet. Now for the hardest question.

People may not know, exactly, what a Fringe Festival is. Trying to describe it: you have to experience it. How would you describe it? Allen: It’s true. It is something you have to experience. It is hard to explain. It is a multi-faceted art festival. I have told people: It’s Burning Man meets vaudeville (laughing). It’s art, but an art festival you never get to see. I always tell people it’s performing art. A majority of it is performing art.

This interview was great! I learned more about one of my favorite events of the year. I hope, grabbed your attention about the Allentown Freak Out Fringe Festival. Maybe, interested you in going to one in the area you live. Who knows, if your city / town does not have one, maybe they should. It is a very unique and fun experience! Thanks Allen for your time and letting us know more about an event that is hard to describe!