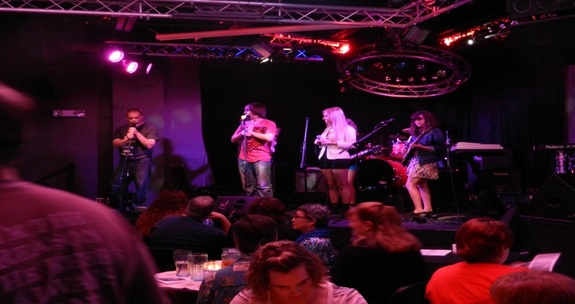 Ray is on the Left, introducing the Lollapollza show

The future of music…

I first heard of School of Rock in August 2011 at Coplay Community Days. In May, 2012, at the Fullerton Fair, I did my first write up of a performance. Performafest at Musikfest really impressed me! Instead of covers, these were original songs. Several shows and articles later. I had a chance to interview Ray. I was really curious about how the local schools were started among other things.

Inspiration from their son

How did School of Rock, in the Lehigh Valley, start? Ray: Our son (Ray and Sue), Travis, was taking lessons at Dave Phillips Music and Sound, in Phillipsburg (New Jersey). It started when he was 13, playing bass. By the time he was 15, he really didn’t practice. A friend turned him to a School of Rock in Chatham, New Jersey. He went there and within the first week, a light switch went on. He would come home. Practice a lot more. Spend 8 hours in the basement. He, immediately, got entrenched in doing shows at School of Rock. You could tell that environment was better than taking pure lessons. He was engaged with other kids. Feeding off the energy of other people in the band. He was always playing with different kids. I think that was in June or July of 2008. By September, we bought the franchise. This was something we had to bring to the Lehigh Valley. Especially, now, schools are always cutting their arts programs.

Ray: A lot of schools, they try.

I remember, back in high school, being in chorus. Chorus and band, they teach you the classics. If I was going to learn an instrument, I wanted to learn Rock music. Ray: School of Rock is more of a ‘performance based’ school. We do lessons and stuff like that. At our core, we are a performance based program. Because of that, we are able to bring kids into the mix that may be good at sports or really sociable. When the come to School of Rock, they get plugged into a community. Because it’s a community, they start making friends they may have never met before. Kids who have the same interests. It may not be the same kind of music they like. They kind of trade off between each other. I noticed that with the first rehearsal of ‘Perfomafest’ last year. I watching the students “I have this idea. This could work here.”

If you are not good at one thing!

If a student comes in for the first time. They don’t know what they want to play or would be good at. Do you encourage them to figure out what they may be good at? Try different things? Ray: I think a lot of it is personal interest. Most people, who come to us, have at least a first sense of what instrument they want to try. We found, with the younger kids, Keyboards and drums are better. When they start playing guitarl,”My fingers hurt”. The drums is straight forward. Pounding the sticks in a certain rhythm. Keyboard, teaches you chords and how the scales work. You look at a guitar fret board and “Uhhh… it’s French.” The six strings are a lot more complicated than they seem.

Ray: There are lots of different postions, ways to do octives, etc. It seems like, by far, we have more guitar students than anyone else. We have had students come in: “I want to try guitar.” 3 months later: “Guitar isn’t it.” A lot of cases, our instructors teach multiple instruments. In many cases, they don’t have to switch instructor. They might switch to a different instructor because the timing was better, and so on. We don’t discourage them from switching instruments. If that is the way they want to go.

Ray: We stick with rock instrumentation: Guitars, drums, keys and vocals. A lot of kids will bring instruments in. The ‘Women of Rock’ show, one of the girls played flute.

Ray: Most of our teachers have bands. That is one question I was going to ask: Experience? Ray: One of the great experiences for the kids is going out and seeing their teachers play. We had a couple of instructors from Easton and one from Rosland. They knew each other. They were playing some really complicated stuff like Zappa! You walked out and wonder: “Why is Justin Beiber popular? These guys kick ass!” We are trying to teach the kids, it is possible to be a working musician. Do what you love and make money at it.

Ray: Our instructors are all working musicians. Our son is a working musician. He teaches and plays. Will that big break come? Yeah! If you are so obsessed with chasing that big break, it’s not going to happen. You have to focus on what you are working on. Improving yourself as a musician. Improving yourself as a performer. You have to be flexible.

Going Back to the School’s history...

Ray: Back in the day, when we bought into the franchise, there was a guy: Paul Green. It was called: The Paul Green, School of Rock Music. They made a documentary about him called ‘Rock School’. ’His thing was, if you open up a school, you do The Wall. It’s challenging and you can find out what the kids are made of. There is parts in there where you have guitarists doing Gilmore licks. There is also songs that kids can do who are beginners. We, purposely, don’t have the kids watch the movie. We try to build segueways where the kids change out while the song is going. There are only a few breaks on the album.

More than the Rock genre

It’s not just rock. I know the school has done a blues show. Ray: Yeah. We’ve done blues, punk shows, Michael Jackson / Prince, Motown. We try not to do constant barrage of metal shows. We try to mix it up. We don’t do a lot of metal shows. It helps the kids form a solid foundation of music. We did a progressive rock show. We did a heavy dose of Zappa. Zappa is jazz. It’s real good to give the kids a broad foundation of different types of music. It also might introduce them to something they never liked.

Ray: Our music director, Duane Beller, is a graduate of Berkley. He is director at both Allentown and Easton. He has a degree in classical composition. He not only has roots in the classic rock. He brings the modern composition as well. He will ask the students what they like. He will go home and listen to it! It’s good for the kids, because Duane is good about capturing that in his head. They will be doing a rehearsal and the kid will be playing a song that he loves!

More than just one band…

Ray: The way School of Rock shows work, you are always, constantly, switching different lineups. It gives you a variety. Always trying something different.

On that note (pun intended), Part 1 ends. I caught Ray in between a 4 week, 8 show stretch. I really, really want to thank him for the time!!!! Thanks Ray!!!

Another, main, question I had was: Student Interaction? Does the school have a strict criteria? Are students encouraged to give instructors ideas? Any hints about upcoming show? Guess you will have to wait until the next issue to find out! Hope you enjoyed part 1.