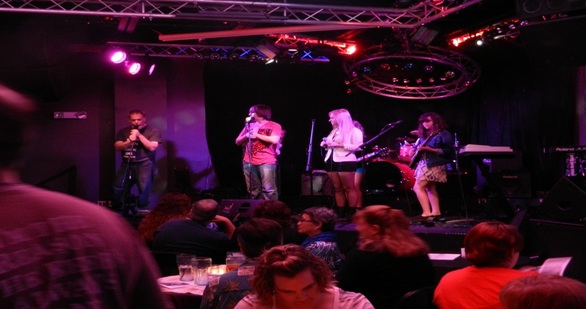 Ray is on the left

Ray gave us a history of School of Rock, Easton / Allentown. Ray and Sue (Ray’s wife and co-founder), found the inspiration from their son, Travis. We also learned how School of Rock may be different from other music programs. We found out about different genres taught and instructor qualifications.

Picking up with the questions I had at the end of part 1. Student interaction encouraged? Ideas from students encouraged? We are about to find out…

The kids having ideas. Teachers listening. That is important? Ray: Absolutely! I don’t want to generalize. I think in most music schools, you learn what the teacher wants you to learn. I think that’s the way School of Rock works. I call it: “Applied Music”. We use the performances and shows to help us teach the music. There is always the end goal in mind. You have to do the show. There is a time constraint.

Ray give us an idea of how students learn.

Ray: You take that guitar lesson and work it into the show. You take it apart: learn what makes it work. Music isn’t as abstract anymore. If you just try to learn music theory, your head’s going to split. What happens is: the kids get the theory and start going beyond it. The musicians form a language of their own. I have been to a few rehearsals and was like: “Huh? What just happened.” Ray: Not just the music, but, the way they communicate with each other. That is a very big part of our performance approach.

Ray: You might get 5 or 6 kids on stage. Sometimes, they don’t know each other. It might be their first time at the school. They need a way to communicate. “When is the break? When is the solo going to end?”… They have to figure it out for themselves. You see our more senior kids onstage. They are cueing the drummer or band. It really blows people’s minds when they see kids doing that. A lot of seasoned musicians can’t do it.

After a brief side-tracked conversation, thanks to me. Ray mentioned School of Rock’s house band: Bank Street.

Yeah, Bank Street, how did that start? Ray: All School of Rock(s) have house bands. It does a couple of functions. It’s a promotional vehicle. People can see what we are doing; in between our seasonal shows. Seasonal shows are every 4 months. How the Schools (Allentown / Easton) do it is amazing. Ray: The program is goal oriented. It gives the kids a chance to do more. If I try harder or help out a little more; I can audition for the Band Street Band. It’s kind of a rewards system.

There is another level beyond Bank Street!

Ray: You can audition for National All-Stars. What is National All-Stars? Ray: It’s something School of Rock started a while ago. It’s a video audition. If you get selected, in the summer, you go on tour. The cap it off with a big festival and major show (Lollapalooza for example). For the past 2 years, we had students go on tour. I have taken notice, students start their own bands while in School of Rock.

Ray: Yeah. If you form a band, with kids in the school, you can use our rehearsal space for free. Nice! Ray: We also do a band coaching program. The kids will get rehearsal time and an instructor to help them out. When you look at a band; they have a theme / package to them. Now we have the open mic nights. When you hear the original music, your jaw drops!

One thing that really surprised me was Performafest. How did that idea come into existence? Ray: We tend to do a lot of covers. We know kids have journals. Write poetry / spoken word. We do Performafest: a 2 week songwriting / recording camp. Just 2 weeks, That’s it??? Ray: Yeah, 2 weeks. There are not restrictions like a 2 hour show. If we get one song done, we get one song done. We want to get songs that are purely student content. The finale will still be at Musikfest this year? Ray: Yes, August 5th / 4 pm / Plaza Tropical. It’s a chance for kids to learn original music. Musikfest is a great experience for them.

Ray: Funny story: One of the kids in our house band. A typical “What did you do on summer vacation?” discussion, when he went back to school. Kids are like: “Went on vacation. Went to Musikfest. Saw some bands…” He gets a turn. “So I guess you went to Musikfest too?” He responded: “No. I played at Musikfest.” (The way Ray said it was seriously funny!) I can just imagine the reaction.

In addition to Musikfest, School of Rock has played at some major, music venues. Ray: “Allentown Symphony Hall…” New York. Ray: Right. We played at the Highland Ballroom. Our kids played at Stone Pony in Asbury Park. World Café live in Wilmington and Philadelphia. In addition, they have also played fundraisers.The point is: they play in major venues. Then under a tent, in a parking lot. We want the kids to get that: helping people out.

Is that another, important, part? Ray: It is. A lot of these kids are pretty fortunate. We are not the cheapest program in the world. We are not the most expensive. I think the kids appreciate they are more fortunate than others. We want them to do these kinds of events (benefits / fundraisers). We don’t want them to have a sense of entitlement. We have done Pediatric Cancer Foundation benefits. It breaks your heart, seeing some of those kids, dancing and having a good time. I think it’s important for the kids to get that sense of balance.

I noticed scholarships are available. Ray: We partnered with a company called: Rock School Scholarship Fund. It has a School of Rock genesis to it. They do fundraisers for the fund. We are required to a fundraiser every year for it. It’s at the Icehouse in Bethlehem, Pa. Everything raised goes to the scholarship fund.

Ray: We are getting more students that are songwriters. They want to learn the music.

What about the stage show part? I have seen bands that get up on stage. Do not move from one spot. Ray: We try to teach them where to stand on stage. Example: Guitarists do not stand behind the lead singer. People want to see you playing guitar. Stage performance will come with time.

When Ray did the interview, he was very busy with current shows. A serious Thank You! For making time for this. I know this was one time you barely have time to breath.

For musicians of all ages: