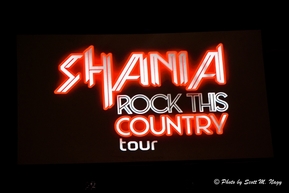 On Friday, October 2nd, the PPL Center lit up with an amazing performance by Country superstar, Shania Twain, who brought her "Rock this Country" tour to Allentown, PA.    Twain has announced this will be her last tour, as she will concentrate on over parts of her musical career, but this didn't stop her giving her all.  She provided a great combination of lights, sounds and audience interaction.

The show opened up with a video sequence containing a combination of "I Love Rock and Roll" and her own "Rock This Country".   Twain then rose up from the beneath the stage on a platform going 20 feet in the air 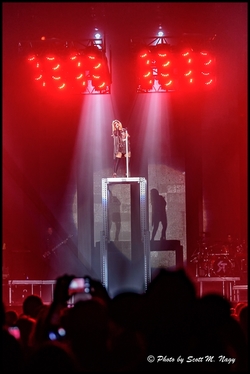 Shania's opened by rising above the crowd!
singing the tour's title song, "Rock this Country".   The crowd rose to their feet, screaming and singing along.

After descending to the stage, Shania followed up the opening with her 1998 chart-topper "Honey, I'm Home".  This was accompanied by an amazing laser light display and a walk out into the crowd on the stage extension.

Twain continued the string of number hits with "You Win My Love"!
and the energy continued in the arena as the floor seats were never used.

The remaining 16 songs were all hits from Twain's three Billboard Country Album chart-toppers, including "Any Man of Mine", "Come on Over", and "You're Still the One".

The performance also included surprises such as Shania sitting on a saddled crane that put her eye to eye with the upper level audience in the PPL Center.  Twain also got very close to the audience by walking her way through the crowd while singing "Any Man of Mine".
After her last song, "(If You're Not in It for Love) I'm Outta Here!", Shania left the stage to the cheers of the crowd.   At the strong urging of the audience, Twain then returned for an encore video sequence and to sing the finale "Man! I Feel Like a Woman."

The show was opened by artist Gavin DeGraw, who performed songs "Soldier", "Fire" and "Best I Ever Had", among others.