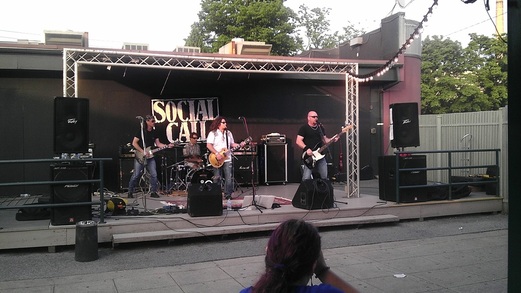 The best way I can describe this band. When I say pure rock, I mean down to the cigarette smoking, while playing, of Larry Werner. Shades of Slash and other rock musicians? This band has every aspect of the genre down!

Social Call went straight into the music! Kicking things off with a cover of Here Comes the Rooster (Alice in Chains). Larry has an almost perfect voice for it.

So I am leading off with the music category.

No cover band can nail every song perfectly. Did Social at least come close? On most songs, yeah. High points included: Here comes the Rooster, and In The Air Tonight (Phil Collins). In The Air Tonight was the second highest point of the show. The band hit both the music and vocals with a surprise. They mixed in Another Brick in the Wall. How the mix went: In the Air Tonight / Wall / Tonight. They did not miss one beat, seriously. What really surprised me in the music mix was first set / third song. They slowed it down a little with Signs (5 Man Electric Band).

There were some low points on music and vocals: Working for the Weekend (Loverboy) / Vocals. Jack and Diane (John Mellancamp) / Vocals and music. There were a few more, just examples here. Jack and Diane did score a high point in another category.

Leading into crowd interaction / Hard Breaks / Slides. Here is where Social Call really pulled it off, especially in the second set! After the rocking start with music, they knew how to talk with the audience. They also knew the audience. Tuesday’s are Bike Night at Maingate. The bar and show are outside. It really was not a get up and dance your ass off crowd. Social Call went the common sense route here. They had conversations / joked around with the crowd and each other. They have a signature “Call”, especially on the first one for virgins to experiencing the band. Oh, before I forget, The mix was 1 of the show’s 2 highest points.

The second was at the end. Larry not only went into the crowd, but up on the deck while playing. Maingate, outside, has a party deck above the bar. Bar walking anyone? You heard me right. He also walked the bar while playing. There was not a lot of head room for this part. Slides? Yes, they did go from one song into the next a few times. Twice it was mixing the songs together. There is a difference 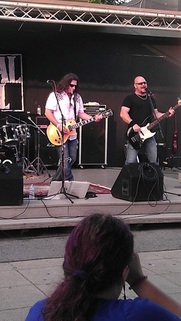 As I said, Maingate’s Bike Night mainly draws a “Let’s hang out / drink / eat / have a good time” crowd. The usual cheers / applause was heard at the end of songs. The band’s signature “Call” drew the best response. They really pulled a response with Jack and Diane. When the mic was held out to the crowd, people did not miss a word. The second set saw the dance floor really come alive with songs Jack and Diane / Some Kind of Wonderful.

Curious about the Band / Crowd energy loop? They hit the stage hard and with power. Half the loop created. Well, the crowd did not pick up on this part, to a point. I have seen several occasions like this. The band tries it’s best, the crowd is just relaxing. The second set started off hard and fast, again. During the set, the energy faded a little. It may have been the setup for the finale (see above).

Did the band play well together? Hell yes! No screw ups or mis-steps. Did not run into each other either. Vocals were switched between members without any problems. The joking around was natural. Like friends would normally do. Drummer, Danny Lacey was not playing due to doctor’s orders. He was there to give the band support. Fill-in drummer, Charles Illingwrth, (thanks Larry) did a great job on music / vocals / and the joking around. Shane Stoneback (guitar / vocals) and Joe Cenchitz (bass / vocals), what can I say? The rocked the place! 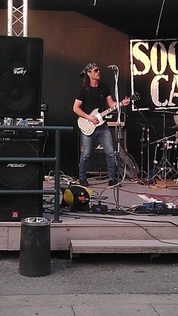 Time to drop into the overall review:

Music: Have Attention! Taking into account: no band can nail down every song. The number Social Call hit vs. missed on vocals / music was good. A few songs the lead / background / harmonies could have been better. A majority were dead on.

Crowd Interaction / Hard Breaks: Surprised Me! Three reasons for this one. 1) Almost every hard break was covered with conversation / joking around / a few time of “Calls”. 2) Letting the crowd take over on a few songs. 3) The end. When Larry went onto the deck and bar. That topped it for me!

Crowd Response / Dance Floor: Have Attention! Response to songs was expected. The “Call” did good with everyone. Dance floor picked up on the second set.

Band / Crowd Energy: Have Attention! The band’s energy was high at the beginning of both sets. During the 2nd one, it faded slightly. Picked up again, when the dance floor came alive. Crowd Energy was not that high for set 1. Set 2, they started coming alive! It could have been nightfall, a few songs, or other factors.

Attendance: Have Attention! Bike Night mainly relies on what nature decides. She chose to grant warm weather and clear skies. The place was busy. This point I am very flexible on, especially with outdoor shows. Honestly, Bike Night’s attendance relies on a band, to a point.

Before I forget: No, noticable, technical issues. Zero factor in the review.

Looking for a cover band that is the rock genre? In the Lehigh Valley, Pa area? Visiting? Check out Social Call! You will see a show that is a great combination of music and crowd interaction. Be ready for their “Call”!!!

I want to stress one thing here. Any review, I don’t care who does it, is one person’s opinion. Nothing more, period. At best it is based on a set criteria and facts / experiences.

If you think the Maingate show caught your attention: