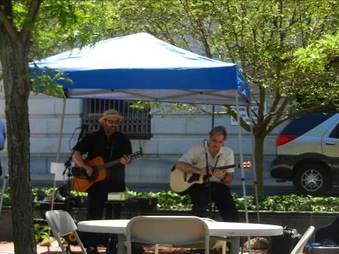 Originally published in the July 19th edition on Amazon / Smashwords.
I heard of Steve Brosky for over a year. Finally having a chance to see him at Lively Lunches in the Allentown Arts Park . He did an acoustic set with Jimmy Meyers. More on Lively Lunches later in this edition. Onto the cd, highlights only.

Starting off upbeat and feeling good, (Buck a Man Blues), the album will have you with a slight smile and moving a little. Mixing the pace up a little on track 2 (Ugly N Personal) is also something everyone can relate to. Track 7, (It’s Only Money), has a little bit of social statement in it.

The cd cover art is cool. It’s something that catches your attention with simple art of a stick family / sun / earth / writing. In other words, it looks like a child drew it. This is not a downside. Keeping things simple and basic: sometimes the best way to go. Even though you do not need them, the inside covers contains lyrics to all songs.

Overall, there are two things that really caught my attention here. 1) The stories and being able to relate to most songs. They are very real and told in a way that has a personal edge. 2) The music variation. It ranges from traditional blues (saxophone / piano) to upbeat, feel good music with a slight pop / rock flair at points.

Even if you are not a fan of the blues, this cd will catch your interest. The stories told in each song are something most people can relate to, on at least one song. Look at your own life and see if I am wrong. I admit, not really into the blues genre. I did pay attention to the cd and it was more than background music / review for me. I honestly love it! Yes, I did smile on some songs and could feel the slower ones.