Good show, in some areas 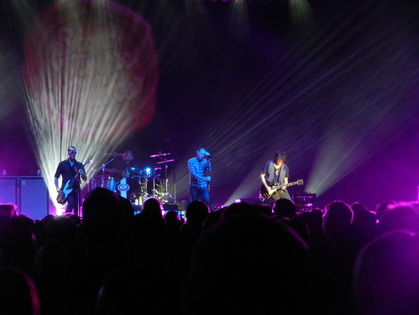 The Sands Event Center on 09/04/13 was the first time I have seen Stone Temple Pilots. Second visit at the Event Center.

I arrived around 7:10 p.m., about 50 minutes before showtime. I always like to get a feel for the crowd and a place. Entering into Vision Bar, there was a growing crowd inside and out. People were doing the usual: talking, enjoying their drinks and having a good time. Walking into the Event Center, I observed a growing crowd in the general admission / reserved seating sections. Filter started things off, that for another review.

There was about a 1/2 hour break between Filter and Stone Temple Pilots. The break worked great. It gave people a chance to head into Vision, refill drinks, grab a smoke, etc. Normally, I would say this is a low point due to having a high energy level / letting it hit zero / having to build it up again. Starting to get used to the way major artists / shows work. The downside: After about 20 minutes, I was thinking "Let's get the show back on. I have seen local shows with a faster turnaround." I still consider the 1/2 hour essential and working out good. Onto the review....

As usual, lights went down, Stone Temple Pilots hit the stage! They started with all the energy and power of rock music. I will start off with the low points this time.

Crowd Interaction was a serious joke. Other than the expected talking to the crowd, there was none. Oh, I forgot: throwing out a few things like guitar picks. Sorry guys, you really blew this category! There was a few feet in front of the stage. Chester Bennington, you should have paid closer attention to the end of the Filter show. With that out of the way, I am serious here. There was a makeshift fence with a few feet in between the stage. Any member could have dropped down for during one song and made an attempt to have people be a part of the show. See the criteria for live music reviews and "The Wanted" review part 1. I realize this was harder for the rest of the band to do while playing. Try to get a little creative. There were security guards standing there. At least Richard Patrick (Filter) did this on the last song. He also made time to meet the fans. Stone Temple Pilots did not take this chance.

The next 2 low points? Hard breaks / slides and music. Music was also a high one. Reason for a low point? Chris Bennington's words. The music was a low point because there were no slides only hard breaks between songs (see criteria for definitions). Early in the show, Chris thanked the crowd for being there. After a short conversation, he stated that would be the end. The band was there to play music. Great! After this, I was expecting several slides / mixes and few hard breaks. Wrong! There was a break in between almost every song. Very few were covered with good crowd interaction. The lights going down between songs then coming back up got old real fast. It is a great way to keep the suspense built up. After the first 2 or 3; the suspense part died. The routine part died with it.

I have to place Crowd response / dance floor in this area. It was "as expected" at best. OK, there really was not a dance floor. The "dancing" part comes in with how much of the crowd was at least moving during the show. Very little on this one. I was in the back and moving around. I also observed the reserved seating areas. For most of the show, the crowd was either just standing / sitting and not really moving to the music and lyrics. As the show progressed, the crowd response was almost automatic. In between songs, they cheered. When the band wanted crowd interaction, it was there. Fists pumped in the air at times. Hands were raised during a few songs. A chant of "STP, STP, STP" was heard between the end and encore.

Music was definitely a high point. The band played every song without missing a beat. Chris Bennington did a great job on vocals and lyrics. The mix was a combination of older and new originals. Even dating back to the early days of Stone Temple Pilots. Band Energy was another high point here. Again, I have to give Chris the main credit. On certain songs, he was all over the stage and giving it his best!

Band Energy was high for the entire show. Looking at the two, big screens; It was easily visible each member was playing / singing hard. Ok, I have to a little credit for the stage show here. At points, the band did use the entire stage. Guitarist (Dean DeLeo) and Bassist (Robert DeLeo) moved around and played facing each other. Drummer (Erik Kretz) did a great job with a few tricks traditional of rock / hard rock bands. Band interaction was excellent! They played like the seasoned pros you would expect. Every member knew where the others were at all times.

Technical was the last high point. Every note and lyric was clearly heard. No screw ups or miscues were noticed. The light show was also excellent. Changing colors on the stage and in the background. This part had a very high surprise factor.

If future shows are like the one at the Sands Event Center.
Would I recommend spending the cash to see Stone Temple Pilots on this tour? Depends on what type of show you like. If you want to see a concert with only great music and light show: Definitely! If you like to feel a part of the show and love a high level of band interaction: No way in hell could I recommend this one!

Band Energy / Band Interaction: Surprised Me!. Even though the band did a great job in this area. For a major band and concert, it is expected. What kicked this up from Have Attention? Chris Bennington's part. The visibility of giving it everything he had.

Technical: Surprised Me! The light show and surprise factor earned the technical people this one. The changes were smooth and variation was wide in this category.

Music: Suprised Me! There was a good variety between classic and current STP songs. Even slowing down a few levels at one point. The band played without missing one beat or lyric.

Crowd Response: Average. The almost automation of the crowd at points with cheers and chants did not exceed my expectations.

Crowd Energy: Caught My Attention: This one did not quite make the expectations. Looking around during the show, I noticed way too many people standing / sitting and not moving. I really could not feel an extremely high energy level during the show.

Crowd Interaction: A Joke! The band really did not try to have too many conversations with the crowd. The hard breaks were covered with very low interaction. The band made no attempt to make people feel like they were a part of it.

Stage show: Average. This rating is a balance between the band using all of the stage on one side. The other side? Lights going down in between almost every song. Boring after a while. The encore was another part "as expected". The "Leave the stage. Have it go dark. Wait a few minutes. Time for the "Do you want more?"" routine has gotten dull and boring with bands. Seriously? Will someone please use your imagination here!!!!! Please, do encores. Just find a new and different way to pull them off. Have the band come down through the crowd as an example. Something / anything different here.

Closing Comments:
Important Note: I did have photo credentials for this show. During the entire show, I stayed in the "general admission" section. Some people may think I am a little crazy here. For any review, local to major, I want to give you the perspective of attending it. I realize some people may like the backstage perspective. Honestly, how many watch a concert from backstage? All photos were taken from the general admission section.

As always, I hope you enjoyed the review. You may agree / disagree. I gave you my observations and ratings per criteria. Check out Stone Temple Pilots and the criteria I use. More photos from the show.