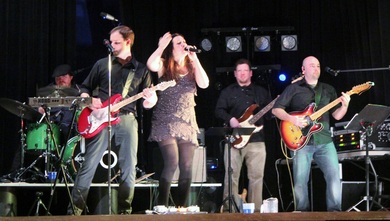 The band was assembled with in the last 2 months.This show was the debut show for them, however if  you did not know that this was their first show you couldn't tell. The band worked well together.  The vocals were split between Ricky & Christine there was several songs were they shared vocals. One of the fan favorite songs was one of the ones that they both shared and that was Paradise by the Dashboard light by Meatloaf It is a perfect fit for these two they have perfect Chemistry in this song.(see video below)

Stage Show
Did they use the whole stage?
Yes they did weather it was Christine singing Ricky singing or Ricky playing his guitar they moved around as much as possible. They even moved the cow bell out to center stage during Love Shack.
Did they get off stage?
No but due to the stage height this really wasn't a choice.
The band energy was up from the word go and they kept it up for the show.
Music
The variety of music they played ranged from It's Raining Men to Paradise by the Dashboard Light to Blurred Lines to Locked Out of Heaven and just about ever time frame between was covered, including what they called their anthem "Walking on Sunshine". The crowd seem to really feel the music and get into the songs.
Band energy
Did they Hit the stage hard and fast?
They started the night off by  having Ian,Pete and Tim showcase  their  instruments before having Christine join in on the keys followed a moment or to later by Ricky coming out and intruding the band then kicked off the show.
Can you get the crowd into it and keep them moving?
The crowd seemed to be really into the band in the first set although they were not on the dance floor, however they were doing quite a bit of dancing by the tables and in their seats, this includes the people up in the balcony. By the end of the first set and the majority of the second set  they filled the dance floor with a decent amount of people dancing til the end of the night. They even had the fans wanting the more when they were done, so they went back on and performed another so that the crowd was really into  After Ricky made a brief joke about playing Puff The Magic Dragon.
Can they keep them moving?  yes
Did they give 100%? Yes they did
Band interaction:
They introduced the members of the band several times.   They interacted with the crowd by talking to them alot during the sets. They spent the set break and after the show talking to their fans. They thanked everyone for coming out several times including thank some of the people that they knew by name.  They joked around with each other between songs.
Crowd response/Energy:
The crowd had a wonderful response to the band once they started on the dance floor they did not wan tot stop dancing.  Including starring at the band for an encore song.

Crowd interaction:
Since the stage was high they really couldn't get off the stage but they interacted with the crowd often by talking to the crowd and cracking jokes about stuff.
Dance Floor:
Did they get people on the dance floor at least a few during the show?
Yes they did!
Technical:
Everything seemed technically good.
Sunshine Symphony is an Excellent band with a wonderful and bright future in front of them we would recommend that you go check them out sometime.
Check them out online:
https://www.facebook.com/sunshinesymphony
https://twitter.com/SunshineSymph
http://sunshinesymphony.com/