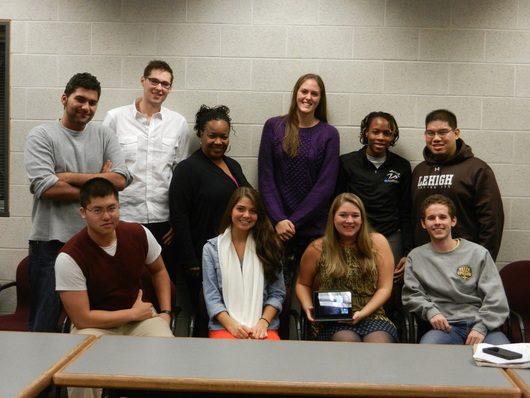 On Monday, October 21, I had the privilege of attending a workshop for this event. Honestly, it was an honor to be there.

I have known Steve Delturk for over a year. Kashi Johnson I was introduced to earlier this year. Steve is a poet / spoken word / HipHop artist. Seeing him perform, is something you have to experience! There was a group at Moravian College called "Raw Noize". I did attend one of their performances in spring 2013.

In the Lehigh Valley, I have hit the point where the spoken word / open mics are on the bottom of my list. After attending several, it is almost always the same people showing up. With one or two actually reading with emotion and passion. The rest just read from a book / papers / tablet. They drone on and on. Too many times, I have checked my phone more than paid attention. With the attitude of "When is this one over?". I always stayed until as long as possible just in case there would be something to write about.

Between Steve Delturk and Raw Noize, I found something that woke up the dead writing / spoken word scene in the area. In fact I have been almost begging other organizers to take it up to this level.

When I received this invite, top of my list!!!! Especially since Kashi is a professor at Lehigh University. Arriving at Zoellner Center for the Arts at Lehigh, just a little late. I entered the room, sat down with the full intention of observing only. So much for that idea!!!!

I sat down in a corner, watched and listened. Let me put it to you this way. If that night was in any way a preview of the show? Get ready to be seriously blown away! Each member of this group has a unique style of writing / performing. I watched almost every member (including one that was skyped in) get up in front of the group and open up to critique. I was not sure if my comments would be welcome. I did make a few in the area of very constructive. At times, every member did the same. Each member that went up to center stage did take all comments in the way they were meant.

I could tell this workshop was not to tear down but help out and build each member's abilities.

The one part I truly loved was Kashi Johnson. The way she critiqued was basic, down to earth, everyone could understand. I was expecting a college professor to have professional words and be very uptight. Not a chance with Kashi. She was very relaxed and had a way of pushing them to a new level. My comment at the end: "Do you sell DVD's? A lot of people could use your coaching." I was very serious.

Overall impression of the workshop:

Even though I was just there to write about it, my comments were not blown off. After a certain point, I wanted to get up and be critiqued by the group. I was real curious the direction Kashi and the others would have showed me. Each member has their own style and way of performing. That is what makes this group different. They feed off each other and help each other without being condescending.

I want to thank Steve and Kashi for the invite. To be there and experience these great writers / performers was definitely a highlight in A Valley and Beyond's life. It was also a highlight in mine. Thank you to the members for allowing a few comments and taking them seriously. I was definitely glad to be there. Now, I can not wait for the performance at Touchstone Theater on Nov. 1!!!! I have a feeling this will set a new standard for any spoken word / poetry open mics I attend.

If you are in the area, especially in Bethlehem for First Friday, Stop by the theater for a performance you will not forget.